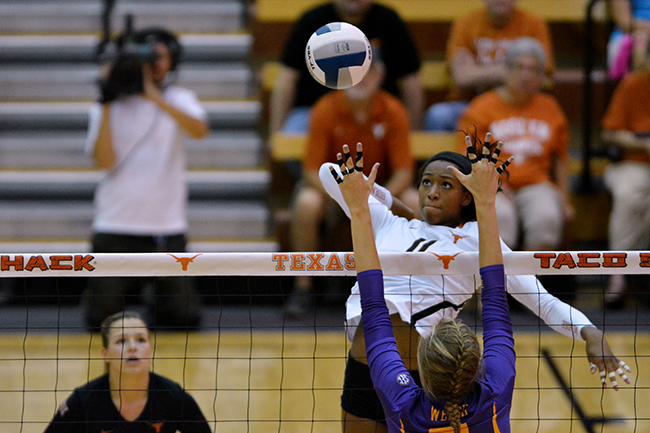 It’s one of the oldest sports adages in the books: To be the best, you have to beat the best.

When No. 3 Texas takes the court this weekend against Nebraska and Florida — both of which are tied for fourth in the nation — in the VERT Challenge at Gregory Gym, the team will see just how good it is.

“Last weekend, we were probably as smooth as we’ve been in a few years in terms of taking care of business and winning handily in some games.” head coach Jerritt Elliott said. “Now we have to do that in a much tougher environment. You want to push your team. You want to see how teams are going to expose you and really learn from that this early in the season.”

Nebraska comes to Austin with a 3–0 record and one dropped set this season. The Cornhuskers have eight players with double-digit kills and a .317 team hitting percentage. All-American junior outside hitter Kadie Rolfzen leads the team with 34 kills and 3.78 kills per set, followed by sophomore outside hitter Annika Albrecht with 28 kills and freshman outside hitter Mikaela Foecke with 23. Sophomore setter Kelly Hunter leads Nebraska with 120 assists.

“Nebraska is a very, very good passing team — probably one of the best I’ve seen in a few years,” Elliott said. “They’re going to pose a lot of problems for us in their ability to side out, so we’re going to have to counteract that with some good defense and some good transition swings.”

Florida holds a 2-0 record and one dropped set as it prepares to face Texas and No. 11 Oregon. The Gators have 114 kills and a 16.3 kills per set average, sparked by junior opposite Alex Holston’s team-high 33 kills and 4.71 kills per set and senior outside hitter Ziva Recek’s 27 kills.

Holston and Recek are tied for third-most blocks on the team with six each. Florida’s dominant middle force is sophomore middle blocker Rhamat Alhassan, who has 23 blocks and 19 kills this season.

Senior setter Mackenzie Dagostino runs the Florida offense and leads the team with 94 assists and a team-high five service aces. Her 21 digs tie sophomore outside hitter Carli Snyder’s for second-most on the team. Senior defensive specialist Nikki O’Rourke has a team-high 30 digs.

Nebraska leads Texas 30-20 in all-time match ups but hasn’t beat the Longhorns since 2010. Texas defeated the Gators in Florida early in 2014, and the Gators returned the favor late in the season, beating Texas on its home court.

“Both are going to be big-time tests for us,” Elliott said. “It should be fun and give us a real good marker in terms of the areas that we need to work on for the remainder of the year.”