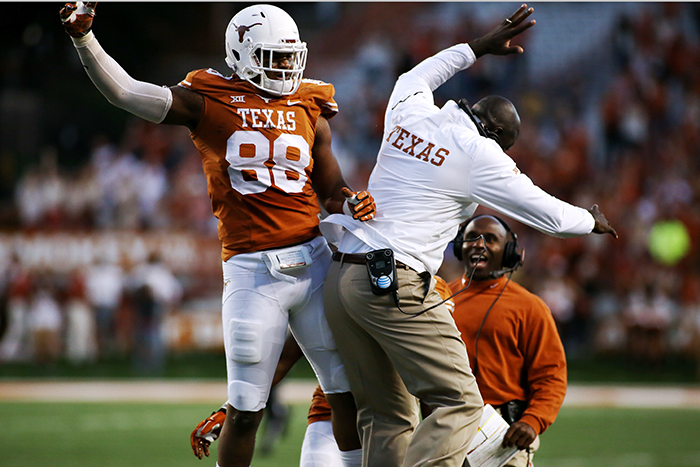 Heading into head coach Charlie Strong’s second season, there’s a different air about the Longhorns’ locker room. The team knows it will be under heavy scrutiny after going 6-7 last season. Yet, the Longhorns are displaying nothing but confidence while facing the challenge of turning the program around.

“There is such a different team chemistry and energy this year compared to last year,” junior safety Dylan Haines said. “[Senior cornerback] Duke Thomas had a quote and he said ‘we always had dogs but now we have a team,’ and you really feel that.”

Last year, the Longhorns were far from the poster child of positivity. Nine players were dismissed from the program for breaking rules, while injuries piled up and the Longhorns stumbled to just their third losing season in the last 20 years.
Now, a year later, Strong’s system is finally in place and the focus is shifting from installing a culture to winning football games. As the players wear shirts that read “no more excuses,” they appear ready to turn that corner.

“Last year it was all about teaching, and then you’re trying to teach it each and every week,” Strong said. “So now you go out and you say just ‘go play’ … they understand when you talk about concepts and what we’re trying to
get accomplished.”

Even though Strong is focused on winning, he’s still shown a more optimistic side this summer. With a more experienced team and a talented freshman class, the pieces are falling into place and the Longhorns are improving on the field.
While the improved play pleases Strong, it’s the cohesiveness in the locker room that gives him his confidence. For the first time since taking over the program, Strong is seeing his team connecting as one.

“We’re really coming together as a team, and we really trust each other,” sophomore defensive tackle Poona Ford said. “We treat each other like brothers. I think that’s going to play a big part this year.”

The improvements in positivity and the team’s closeness are vital for the team’s chemistry. When the team is playing more together, there’s bound to be better results on Saturdays. With improved relationships and better confidence, the Longhorns are now ready to take that next step.

While Texas’ coaches and players have embraced a new approach in the locker room, their attitude wasn’t developed overnight. Strong said that the Longhorns prepare more effectively this year, which has helped them practice and will make them more competitive going forward. More importantly, the extra preparation gives the Longhorns their confidence.

“You have to have that confidence and it has to build,” Strong said. “I just explained to our team, let’s not wait to wake up Saturday morning and say we have confidence … it’s going to take each and every day.”

The Longhorns will need to keep building their confidence as they head to South Bend, Indiana, to take on No. 11 Notre Dame this weekend. Listed as a 10-point underdog, according to CBS Sports, many are already counting Texas out against a talented Fighting Irish team. Yet, with their newfound confidence, the Longhorns won’t be intimidated.

“We’re going to shock a lot of people,” said senior defensive end Shiro Davis. “We need to go out and prove that we’re back, and we’re the big dog on the block now.”