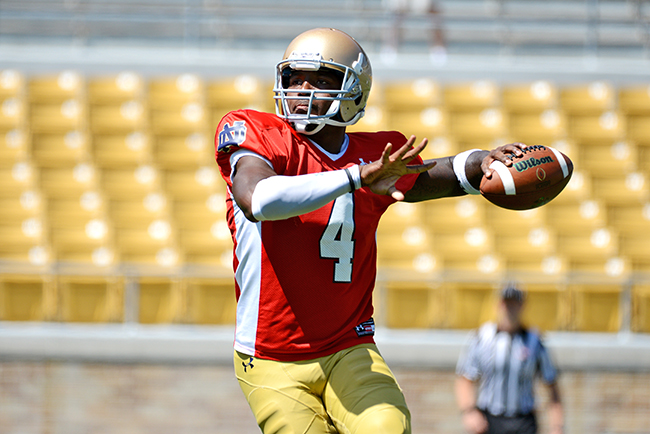 Will Fuller’s name is already being tossed around in Heisman talk, and rightfully so. The junior racked up 76 receptions for 1,094 yards in a breakout 2014 season. His best game was overshadowed by a 43-40 overtime loss to Northwestern, where Fuller had nine catches for 159 yards and three touchdowns. He’s tied at the top of the Notre Dame record books with 15 single-season touchdown receptions and is poised to have an even better year. Texas defensive backs will have their work cut out for them trying to contain the explosive Fuller.

The Texas offense faces one of the best linebackers in the country in junior Jaylon Smith. He led the Notre Dame defense last season with 112 tackles, and with all 11 defensive starters returning, the Longhorn offense has a force to be reckoned with. Smith is speedy, with the ability to get from sideline to sideline quickly, burst through blocks and get to the ball to shut down offensive playmakers. As the Texas offense struggles to find its identity, look for Smith to take advantage of any mistakes the offensive line makes and come through with big tackles to stop the running game.

Junior Malik Zaire earned the starting job for the Fighting Irish after quarterback Everett Golson transferred to Florida State this spring, and Zaire’s performance will be key to a Notre Dame turnaround after a late-season implosion last year. With only 35 career pass attempts under his belt, Zaire was used primarily as a backup and made his first start against LSU in the Music City Bowl on Dec. 30 after the Irish lost four of their last five games behind Golson. Zaire helped guide Notre Dame to a 31-28 win, passing for 96 yards and completing 80 percent of his passes, along with 22 carries for 96 yards. Although Zaire’s stats don’t exactly jump off the page, he’s a dual-threat who could pose problems if the Longhorn defense doesn’t stay on their toes.

KeiVarae Russell promised his coaches and teammates he would be back for 2015. One year later, he’s starting the first game of his senior season after serving a two-semester suspension for academic dishonesty allegations. After enrolling at a community college and continuing to train for a year, Russell has been cleared by the NCAA and is hungry to prove what he’s made of on the field. The All-American made waves his freshman and sophomore years, recording a total 109 tackles and starting all 26 games. He was regarded as Notre Dame’s best defensive back and is set to pick up right where he left off. Although Russell is likely to be shaking off some rust Saturday, Texas junior quarterback Tyrone Swoopes and the Longhorn receivers need to play smart and be careful with pass plays to avoid costly interceptions and pass break-ups at the hands of Russell.