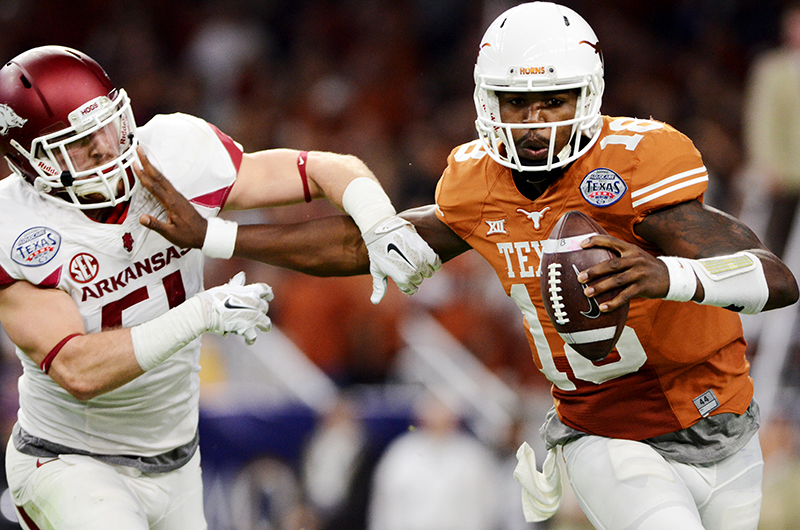 A quarterback steps up and gets in a rhythm. Yes, just a quarterback. It really doesn’t matter who, as long as junior Tyrone Swoopes or redshirt sophomore Jerrod Heard show up. Last season, Swoopes completed 58.3 percent of his passes with 13 touchdowns and 11 interceptions, and Heard was redshirted. If one of these QBs can make some plays and move the offense down the field, Texas stands a huge chance of winning.

Defensive backs learn to tackle. Last season, Texas was ranked No. 25 in total defense. But this year, the secondary will be without Mykkele Thompson and Quandre Diggs, who led the defensive backs last season. Senior corner Duke Thomas will have to play lights-out coverage on Notre Dame receiver Will Fuller. Fuller had 1,094 yards last season with 15 touchdowns and could be the game-changer for Notre Dame.

The Horns can establish the running game. Running back Malcolm Brown led the team with 183 carries last year. In his absence, senior running back Johnathan Gray will need to be the star. Gray had 147 carries last season with 637 yards and seven touchdowns. Sophomore running back D’Onta Foreman got barely any playing time last season, but he will get a fair share against Notre Dame. Foreman will need to step up in that second spot.

The defense cannot stop Notre Dame quarterback Malik Zaire. This will be Zaire’s first season as a starter since the departure of Everett Golson to Florida State. Zaire only had 35 pass attempts last season, but completed 21 of those. The difficult thing about Zaire is that there is such little film of him, which could be a big advantage for Notre Dame early in the game. Texas was the No. 11 defense last season in team sacks. However, Texas lost big defensive players Jordan Hicks and Malcom Brown to the NFL draft. Texas will need big plays from freshman linebacker Malik Jefferson, senior linebacker Peter Jinkens, sophomore defensive tackle Poona Ford and senior defensive tackle Desmond Jackson.

Notre Dame gets its running game established. Texas ranked No. 59 last season in rush defense. The defense allowed 2,136 rushing yards and 17 touchdowns last season. This is an obvious weak spot for the defense that Notre Dame will most definitely target. Lucky for Texas fans, Notre Dame was pretty weak at rushing last season, ranking No. 68 in rush offense with an average of 159.5 yards per game. Junior Tarean Folston is the go-to running back for the Fighting Irish, rushing for 889 yards last season and six touchdowns.