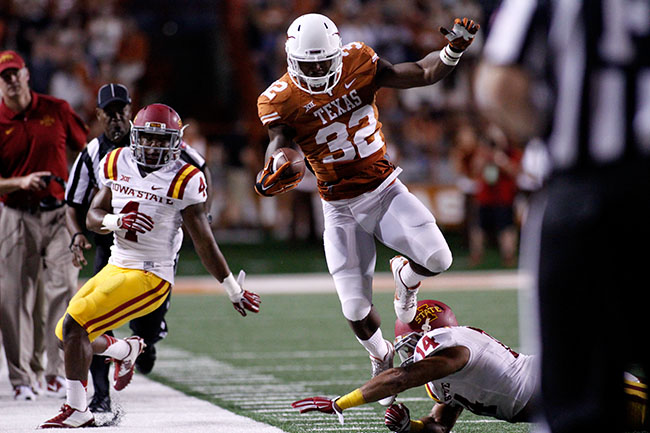 The Longhorns have waited a long time to make up for the brutal end to their 2014 campaign.

After losing 48–10 to TCU at home to close out the regular season, the Longhorns were completely stifled by Arkansas, accumulating just 59 yards of offense in the 31–7 loss at the AdvoCare V100 Texas Bowl. The back-to-back blowouts to end the season sealed the Longhorns’ 6–7 fate, the program’s second losing season since 1998. Following the late-season meltdown, head coach Charlie Strong made a promise: Losing seasons will never be the standard at The University of Texas.

Now, Strong has his first chance to make right for last season’s woes when the Longhorns travel to South Bend, Indiana, to take on the No. 11 Fighting Irish under the historic lights at Notre Dame Stadium.

Texas has been working all offseason to mend its issues from last season. It’s revamped the offense, recruited a talented freshman class and fielded competition at several positions. While they won’t receive their typical “tune-up” match against lesser competition to start the year, the Longhorns are relishing the opportunity to open with a high-profile match-up.

“I think [the] guys are more excited now to definitely know that we’re getting ready to play a great team,” senior running back Johnathan Gray said. “I think the guys are excited to go in with some competition and get ready to just show what we’ve been working on for this year and show everybody that Texas is getting back on top.”

The Longhorns will have their work cut out for them against Notre Dame. Coming off an 8–5 season, the Fighting Irish are returning 19 starters and will field one of the nation’s top offensive lines. Freshman quarterback Malik Zaire has only one career start to his name, but a talented supporting cast surrounds him.

“Their offensive line is a veteran group,” Strong said. “Wide receivers are a veteran group. They may be having an issue at running backs, but they have some guys who have played back there who can go move the football for them.”

Strong will need his offense to produce in order to keep up with Notre Dame’s powerful offense. He’s emphasized that the unit, led by junior quarterback Tyrone Swoopes, looks stronger and should be able to compete this season.

While Strong said he has full confidence in his quarterback, he’s still counting on his playmakers to carry the load. With three freshmen starting on offense and an untested receiving corps, the Longhorns especially need Gray to make an impact.

“We have to run the ball because, if you run the football, you can control the clock, and then you don’t put everything on the quarterback,” Strong said. “I told our guys, ‘Let’s not ask our quarterbacks to win the game.’”

As 10-point underdogs, according to CBS Sports, the Longhorns have a chance to make a massive statement on national television this weekend. With a win, the Longhorns can take the momentum into the start Strong’s second season at the helm.

“We know it’s a big game, but we treat it as every other game,” senior tight end Alex De La Torre said. “We have to focus on our objectives. We have got to just go do our jobs.”