Swoopes, Zaire to face off in South Bend 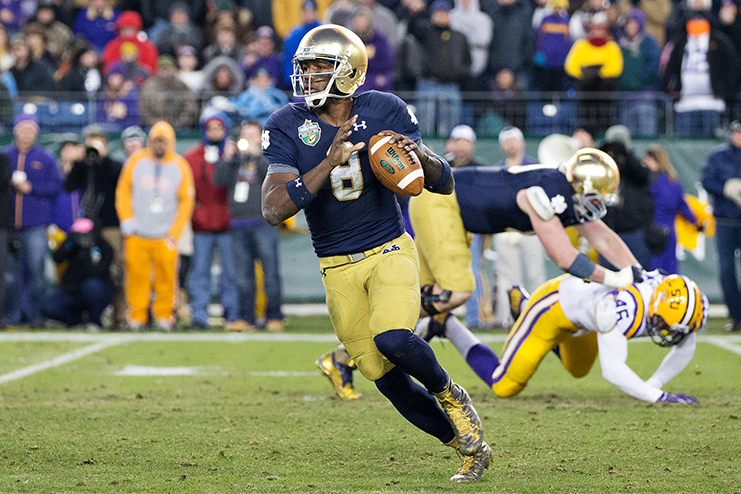 Malik Zaire had the ball in his hands.

In his first collegiate start, the Notre Dame quarterback held it when kicker Kyle Brindza’s 32-yard field goal cleared the uprights and won the Music City Bowl for the Irish over No. 23 LSU 31-28.
While splitting snaps with quarterback Everett Golson, who started Notre Dame’s previous 12 games, Zaire finished 12-of-15 with 96 passing yards, 22 rushing yards and one touchdown on his way to being named the Bowl MVP. Tears streamed down his eye-black-striped face.

But Zaire didn’t know if he would start the 2015 season. When spring practice began, Notre Dame head coach Brian Kelly said Golson and Zaire would compete for the starting job.

“They’ll continue to compete into August,” Kelly said at a news conference April 9. “There’s no question.”

Zaire and Kelly didn’t need to wait until August. In May, Golson announced he would transfer to Florida State. Kelly named Zaire the starter soon after. He gave him the ball and the keys to the offense.
Now Zaire gets ready for another test when he faces Texas on Saturday in South Bend. It’s another game where he could make headlines, for the right reasons or the wrong ones.

“I have 100 percent confidence in myself to be able to handle this job,” Zaire said Aug. 18. “That’s why I was able to be granted the ability to start and the support from my teammates and coaches to help this program win football games.”

Zaire won’t be alone in his quest to win games for Notre Dame and bring them another bowl victory. Notre Dame brings back four members of one of the best offensive lines in college football last season.

“We are very locked-in,” senior offensive linemen Ronnie Stanley said on Aug. 18. “When we are in there, we are live. We are a very serious group out there.”

Zaire will have targets to lock on to. He has junior wide receiver Will Fuller, who racked up 1,094 receiving yards and 15 touchdowns in 2014. There’s wide receiver Corey Robinson, the son of former NBA Hall of Famer David Robinson, who is 6-foot-5-inches and has the ability to turn a jump ball into a highlight.

“Being consistent for every rep and making sure there isn’t a drop off from one guy’s performance to the next is our priority,” senior wide receiver Chris Brown said. “We want to have the same chemistry with every person on the offense. That way, we’re a well-oiled machine.”

The machine that is the Notre Dame offense may be well-oiled, but it can also be fast-paced. Especially with a 6-foot tall, 225 pound dual-threat quarterback at the helm of the offense. A quarterback with characteristics that reminds Texas defensive coordinator Vance Bedford of a Super Bowl-winning quarterback.

“[He reminds me of] Russell Wilson,” Bedford said on Wednesday.

Wilson has similar physical characteristics of Zaire. Wilson is 5-feet-11-inches and weighs 206 pounds. But the comparison doesn’t stop at the physical.

Zaire will try to beat Texas with his feet or through the air Saturday. The ball is in his hands.