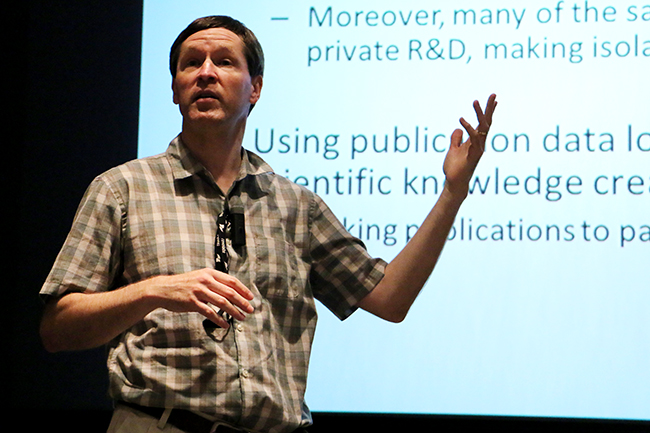 The government must partner closely with energy companies to combat climate change, according to Syracuse professor David Popp.

As part of the 2015 UT Energy Symposium’s opening event, Popp spoke Thursday about the necessary intersection between politics and energy technology.

“[Research and development] can play an important role in bringing energy technologies to the market,” Popp said. “But it is a complementary role, and we need to have other policies such as carbon tax and using the technologies.”

Popp said the government must increase R&D spending by 250 percent to reduce the threatening effects of climate change.

Popp became interested in energy as an economist and has studied technology and environmental policy for 20 years.

Popp’s lecture highlighted the cost as well as the role of government R&D in technology change. Maia Draper, public affairs graduate student, said she was able to relate the lecture to her work at an agency involved in government investments.

“I’ve worked in an agency that has spent money in government investments, so I was interested in the economic impact of that,” Draper said.

“The energy crisis is the biggest challenge in the entire world, and some people take it for granted. This is about trying to produce energy cleanly, not for today’s needs, but for the future,” Estes said. “I am studying electrical engineering to impact the energy field. It takes more to drive change than just engineering. You have to understand the policy side and be able to interact with people.”

Vivek Nath, a public affairs and energy and earth resources graduate student and teaching assistant for the symposium, said the symposium gives students a platform to present research to their peers.

“The symposium is a collaborative effort where speakers from a variety of different fields come to present their work and explain what is happening in the field,” Nath said. “My favorite part of the discussion series are the sessions dedicated to allowing the students to present their own research. It gives them a chance to apply what they have learned to their own interests.’

The UT Energy Symposium will hold events in the Avaya Auditorium of the Peter O’Donnell Building every Thursday evening this semester at 5:15pm. This is the ninth semester the program has run, and the presentation will be accessible online.