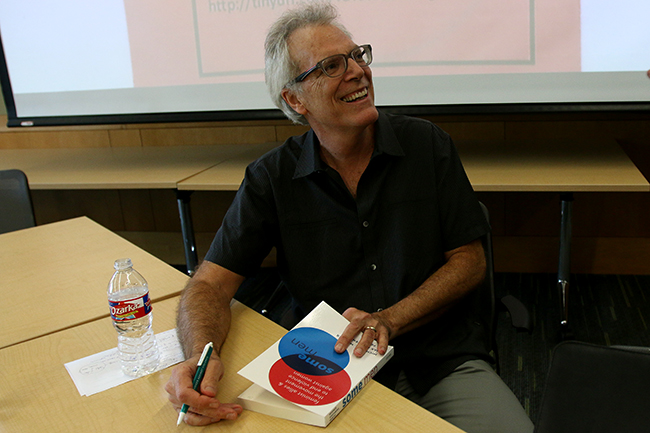 Voices Against Violence, a group affiliated with the Counseling and Mental Health Center, launched a new program Thursday aiming to include male-identified individuals into the conversation of sexual and domestic violence on campus.

With it’s first event, “This is Men’s Work,” the program, MasculinUT: The Healthy Masculinities Project, hosted a panel of speakers which included Michael Messner, professor of Sociology and Gender at the University of Southern California, as well as UT faculty members and Student Government representatives.

“We intentionally pluralize masculinity because we want to explore the different facets of what it means to be a man in our world,” said Erin Burrows, outreach specialist for Voices against Violence. “One of the things we really landed on was most violence was committed by men but most men aren’t violent, so how do we fill that gap and really work with men to engage other men in this conversation?”

Messner said he thinks younger generations of men identify with feminist values but don’t necessarily use the label as an identifier because of a millennial disinterest in ideological labels.

“For the younger generation, feminism has kind of been in the air [men] breathe without even knowing it,” Messner said. “Feminist ideas are really built into our schools, our curriculum and our organizations, and the idea of agreeing that women and men should be equal is looked at as common sense now by a lot of young people.”

Messner and the other panel members agreed that the feminist and other equality movements, like those pushing for racial equality, LGBT rights and economic equality, can intersect. This idea of intersectionality, the inclusion of other “progressive” movements into others, is a way of furthering the movement in the future,
according to Messner.

“Men need to be part of the conversation, even though  we learned today that there has been some sort of contradiction with intentions and contexts,” said Gloria González-López, an associate professor in the sociology department. “So I definitely celebrate the presence of young men in these dialogues.”

According to Burrows, the MasculinUT project is still planning future film showings and talks with guest speakers in an effort to reach more students.

“You plant a seed, and then you never know where it’s going to flourish or grow,” González-López said. “It’s like a promise, and we had professors from UT, students and other activists here, and it was really great.”