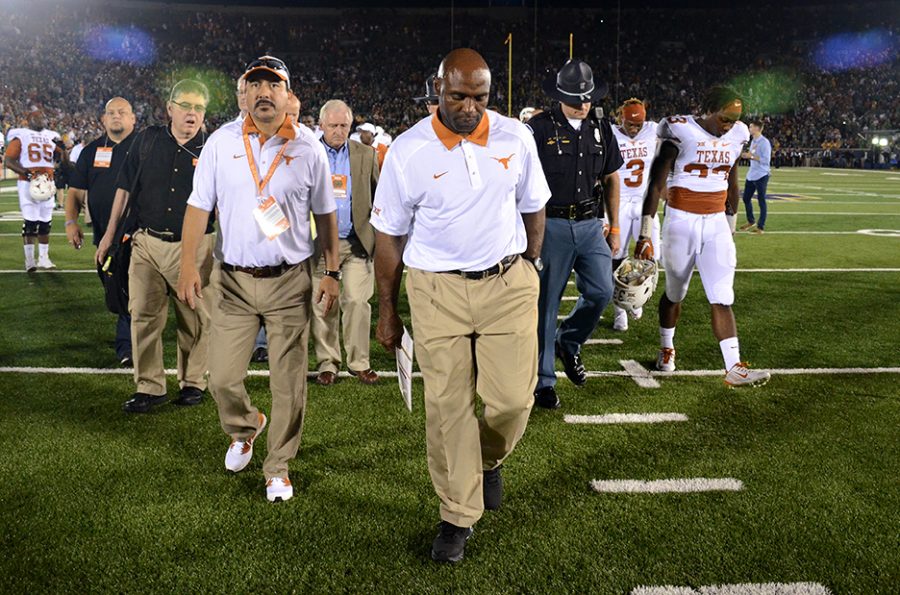 All offseason, the Longhorns preached a new attitude and a better team heading into head coach Charlie Strong’s second season.

“This whole team will be a lot better than it was last year,” Strong said this spring.

However, on Saturday night at No. 11 Notre Dame, that didn’t happen.

The Fighting Irish dominated the Longhorns from start to finish while tripling Texas’ total yardage and nearly doubling its time of possession. If Texas showed anything in the 38-3 beating, it’s that it still has a long way to go before it will contend against top teams.

With the Longhorns finishing last season in brutal fashion with back-to-back blowout losses — including a 59-total yard performance against Arkansas at the Advocare V100 Texas Bowl — the shellacking in South Bend, Indiana, to start the new season is especially troubling.

“The worst thing we can do is get [Swoopes] to third down and we got him to third down tonight and allowed them to just tee off,” Strong said.

While the loss mostly came down to execution, the Longhorns’ offensive play calling also showed the same troubles from last season.

Most notably, senior running back Johnathan Gray received just eight carries, despite Strong and his staff emphasizing a need to run the ball this year to take some of the burden off of Swoopes. His 5-yard-per-carry average showed the ground game’s potential, but he didn’t get the ball enough to establish a legitimate running game.

“We talked about, on defense, containing their quarterback and not allowing him to throw, and he had all day to throw the football, and they were able to execute on some big plays,” Strong said.

Strong has said several times that this season is about turning the corner. He’s preached that losing is not the standard at Texas and that the Longhorns will not struggle in the same ways this season.

With stout competition in California, No. 2 TCU, No. 4 Baylor and No. 19 Oklahoma looming, the Longhorns need fixing and they need it fast. Despite the loss, Strong is still optimistic.

“You would have figured out we would have came out and played much better than we did,” Strong said. “But you can still look at it at the end of the day at 38-3 and I think we are a better football team than that.”

Now, Strong has to show it on the field.