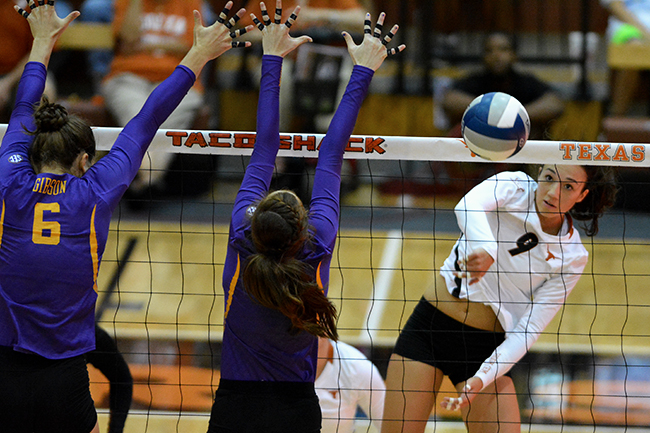 Texas Volleyball has had a lot of success over the years, led by some of the best players in the country.

The Longhorns have seen 40 players earn All-American honors, with 15 named either Big 12 or Southwest Conference Player of the Year. Senior outside hitter Amy Neal, who came to the 40 Acres as part of the No. 2 recruiting class in 2012, is on her way to becoming the next Longhorn to earn national attention.

Neal was the 2011 Gatorade Volleyball Player of the Year for the state of Texas, a two-time Class 4A state champion with Lake Travis High School and the No. 18 recruit in the nation, according to Prep Volleyball’s rankings.

She played in 20 matches her freshman season, making one start and notching seven kills along with 18 digs and two service aces as she helped Texas clinch its first national championship since 1988.

Neal has grown over her time at Texas, going from a situational player in her first season to a key part of Texas’ success over the past two years. Five matches into her senior season, Neal is excited to step into a leadership role on and off the court.

“It’s been a lot of fun being the role model for the freshmen,” Neal said. “Showing them what we know and helping them out with the systems and practice and all that [has been] great.”

Neal’s playing time increased significantly in her sophomore season and that trend continued into her junior year, improving both her statistics and performance. She has become a consistently strong passer and server for the Longhorns, registering 237 digs and 24 aces as a sophomore, and 263 digs and 22 aces as a junior. She currently leads Texas with nine aces and has the third-most digs with 43 thus far into the 2015 season.

“Her serve is deadly, and it goes on to some big-point wins for us,” head coach Jerritt Elliott said. “She’s got to be good for us in the serve receive area and offensively, and that’s what she’s been able to do.”

The biggest improvement in Neal’s game, however, comes in her attacking ability. She recorded 48 kills in 2013 and more than quadrupled that number in 2014, tallying 204 kills for a .223 hitting percentage. Following a career-high 18 kills against Florida on Saturday afternoon, Neal boasts a team-high 63 kills through five matches this season. She’s been Texas’ top hitter in four of its games and has registered double-digit kills in every match.

“[Neal] makes some good attack selections,” Elliott said. “She’s been steady and for her to post those kinds of numbers is great for us.”

Elliott has repeatedly called Neal the glue holding Texas together this season. She’s an All-American, a competitor and a leader whom the Longhorns will continue to lean on as they make another run for a national title.