Longhorns get ready for Texas Classic 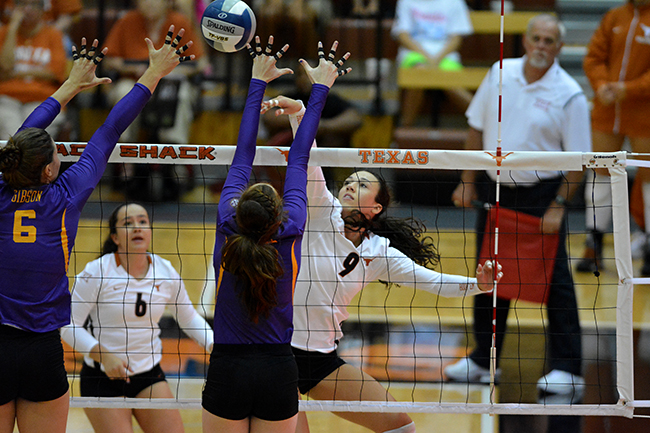 Following a 1-1 showing at the VERT Challenge in Austin, No. 4 Texas will take on three nonconference opponents at the Texas Classic this weekend in Gregory Gymnasium.

The VERT Challenge served as the first true test of the year for Texas, as it faced a pair of top-10 teams in Nebraska and Florida.

“This is the type of competition we will see later on in regionals and in the regional finals,” senior outside hitter Amy Neal said. “I think it’s good we did this early so we know that it is going to happen later on in the season.”

Play opens for the Longhorns on Friday with the Longhorns (4-1) taking on unranked UTSA at 12:30 p.m. and then squaring off with unranked Santa Clara at 7:30 p.m.

UTSA, although unranked, provides another tough early season test for the Longhorns. The Roadrunners currently hold a 7-1 record and most recently defeated No. 12 Oregon in four sets in San Antonio on Sept. 7. The victory over Oregon was UTSA’s first-ever win against a ranked opponent.

“You couldn’t have asked for a better performance or a better result,” Roadrunners head coach Laura Neugebauer-Groff said.

The match against Santa Clara offers a chance for Texas to hone its skills and strategy as a unit in a less competitive environment. While the Broncos head to Austin with a 4-2 record, they have yet to record a win against a ranked team. For Texas head coach Jerritt Elliott, Friday evening’s match will give his team an opportunity to refine some sloppy play, specifically in the team’s passing and setting.

“We got to go back and watch film and talk about the mentality side of it,” Elliott said. “Your hope is that they have a little bit of pride and they come back and battle.”

The weekend will conclude with the Longhorns’ toughest test of the tournament as they face No. 14 Colorado State. For the Rams, their biggest challenge thus far in 2015 has been replacing setter Deedra Foss, who graduated last year after winning the Mountain West Player of the Year award. CSU dropped five spots from the No. 9 spot a week ago, but it still holds a 5-1 record, tied with Wyoming to top the Mountain West.

With a 4-1 record and No. 4 ranking, Texas volleyball looks to improve its record this weekend leading up to conference play, which begins Sept. 23. The Longhorns are currently the top-ranked team in the Big 12.