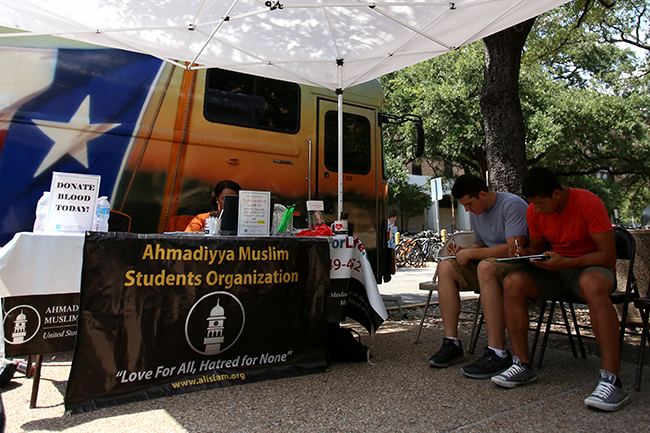 The Texas Ahmadiyya Muslim Students Organization collected 42 pints of blood on the first day of its blood drive in an effort to positively reshape perceptions of Muslims in the wake of 9/11.

The blood drive is part of a national campaign to pay homage to the 9/11 victims and educate the public about the peaceful nature of Islam, according to biochemistry freshman Daniyal Munir. The Muslims for Life Blood Drive has run annually every September since 2011, which was the 10th anniversary of the attacks. The Muslim student organization aims to remove misconceptions of Islam by dispelling the misconceptions and promoting a peaceful coexistence within society, according to their website.

Munir, who volunteered and gave blood at the event, said he thinks the blood drive shows a positive side of Islam.

“We are working to better the name of Muslims through helping the community with these events,” Munir said. “The blood drive is a way to show people what Muslims are really about, like helping people. I’m sure people have seen what we’re doing here and realized the good in it.”

To facilitate the blood drive, the organization has partnered with the hospital system Baylor Scott & White Health, which works with universities, religious entities and other organizations to collect blood for more than five years.

Ashley Davis, a donor service recruiter for Baylor Scott & White Health who has worked with AMSO for three years, said more than 75 students have stopped by to donate blood since the drive began.

“I personally donate blood every eight weeks,” Davis said. “People don’t realize that donating one pint of blood can save two people.”

Human development senior Sandra Benyamin, who donated a pint of blood, said she believes every healthy person should donate blood.

“I am always looking to give blood — it changes the lives of those in need when they get blood,” Benyamin said. “I feel blessed to have donate-able blood. It is the least I can do.”

Benyamin said that, through the blood drive, Muslims can stand in solidarity with the victims of 9/11 and their families.

“The terrorists acted in the name of Islam and associated it with brutality, violence and extremism, but that is not right,” Benyamin said. “Islam is a religion of love and those people were not Muslims, and that’s what this blood drive is aiming to show.”