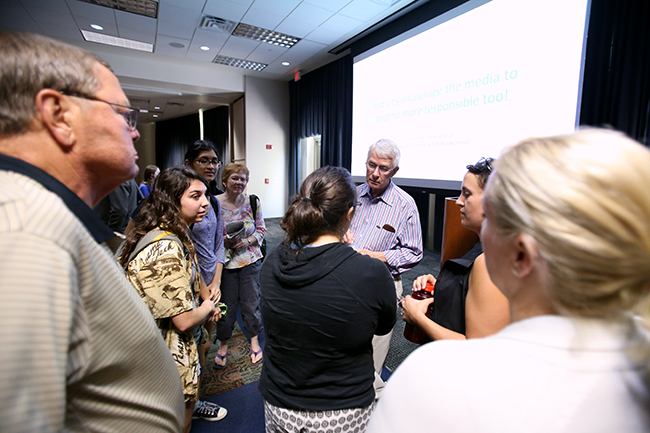 Modern GMOs are safer than traditional plant breeding, have no scientifically proven damaging effects and have nutritional benefits, Roberts said during a lecture Thursday. Non-governmental organizations, such as the World Health Organization and UNICEF, also agree that GMOs can alleviate world poverty, Roberts said.

Critics of GMOs express concerns that the production process is too manufactured and in turn harmful to people’s health, Roberts said.

“As soon as you start to obfuscate the product and the way in which it is produced, you start to run into trouble because the method doesn’t matter,” Roberts said. “The product matters.”

Environmental science junior Kara Posso said she believes GMOs should be used because of their potential benefits.

“GMO foods, if put to use, could turn out to be more sustainable by allowing us to feed a lot of people,” Posso said. “It would also mean using fewer pesticides, which are damaging to water resources.”

Golden Rice, a modified crop containing high amounts of vitamin A, could reduce vitamin A deficiencies in developing countries, a major cause of childhood blindness, according to Roberts.

However, its production has been delayed as a result of the fear and regulation surrounding GMOs, Roberts said.

“Had this been a traditionally bred plant, it would be out in the field,” Roberts said. “And so what happened is that Greenpeace, Green Parties and the public in general was so convinced that GMOs were bad [that] now we have 14 years of delay with half a million to a million children dying every year.”

The benefits of genetically modifying crops for the developing world cannot continue to be hindered by the unsubstantiated claims from Green Parties, political parties focused on environmental issues, environmental organizations, such as Greenpeace, and the resulting regulations, Roberts said.

Lauren Whitsell, aerospace engineering freshman, said she is opposed to GMOs because of the resulting economic impact on farmers.

“I don’t think we should allow GMOs because of the negative effect they have on the small town farmers,” Whitsell said. “GMOs were created by big corporations to dominate the agricultural market.”

Plan II and biology freshman Amy Ong said she attributes the reluctance attitude toward Golden Rice to the moral standards of some scientists who believe GMOs are detrimental to people’s health.

“The delay of implementation of Golden Rice, I think, can partially be attributed to the polemical role of ethics in science,” Ong said. “Golden Rice would be a great solution to vitamin A deficiencies.”