Scenarios: Ways Texas could win or lose this weekend 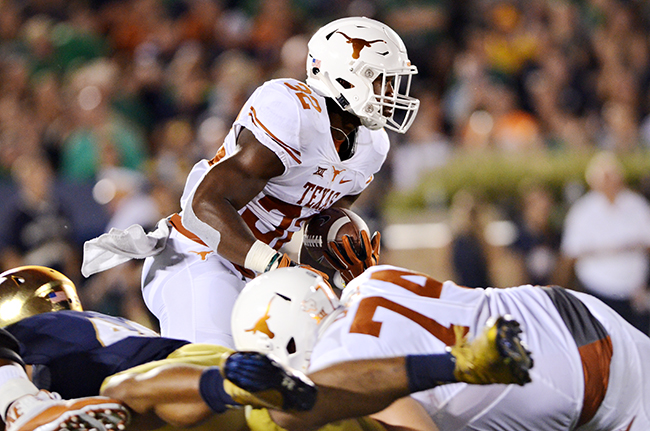 The offensive line blocks. Against Notre Dame, the offensive line looked like an offensive clump. The line dissipated every time the ball was snapped. The Fighting Irish sacked Texas’ quarterbacks three times in the first half, and Texas only had 103 passing yards while Notre Dame had 313. While some of this is due to the quarterbacks, some is due to the lack of time in the pocket. Junior quarterback Tyrone Swoopes barely had time to drop back before a defender came running into him.

It uses senior running back Johnathan Gray. Gray has so much talent and it is not utilized nearly enough. If the offensive line can play better, maybe Gray will be able to get more yards. Texas only had 60 rushing yards against Notre Dame’s 214 rushing yards. Gray accounted for 40 of the Longhorns’ yards on eight carries. Gray has to be used for Texas to win, as he is the Longhorns’ greatest weapon.

It gets first downs. Notre Dame scored two touchdowns before Texas got a first down Saturday. The go-to play of three-and-out cannot fly any longer. Texas must convert on each set of downs. Texas had eight first downs on Saturday compared to the Fighting Irish’s 30. That number will make winning against Rice impossible.

It gets rid of the hurry-up offense. This fast-paced offense has its benefits and works really well for some teams — Texas is not one of those teams. Swoopes is not fast enough for that pace, and the offense does not get set fast enough. The point is to get the defense off its game. That was not happening against the Fighting Irish. What ends up happening is that the hurry-up offense makes Texas three-and-out even faster, which puts the defense back on the field after a short break. This style of offense is destroying the defense. The defense does not stand a change when the offense continuously goes three-and-out. Texas’ time of possession was a little under 21 minutes, whereas Notre Dame had the ball for 39 minutes.

It plays like it did last week. If we see the Texas that was in South Bend, the Longhorns might lose to Rice. The offense failed to produce anything, and Swoopes was 7 for 22. The secondary couldn’t cover a receiver. The only score for Texas was a field goal. The defense allowed 38 points. If Texas comes out looking like that, it cannot and will not win.