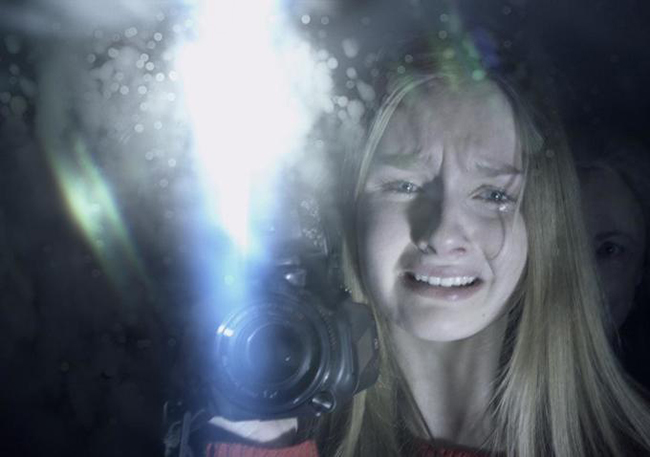 Considering M. Night Shyamalan’s recent reputation as a cinematic joke, it’s fitting he’s released a horror film that actually serves as a perverse, dark comedy. Released Friday, “The Visit’s” premise — two children’s encounter with their murderous grandparents — presents potential for comedic gold. Shyamalan takes advantage of this opportunity but tries to pack in a little too much story by stuffing melodrama into a horror spoof. This tonal disconnect causes him to stumble, but decent performances and a fun, engaging story keeps “The Visit” from becoming another horrific failure for the embattled director.

The nightmarish trip begins as siblings Rebecca (Olivia DeJonge) and Tyler (Ed Oxenbould) travel to see their estranged grandparents while their mother hops aboard a weeklong cruise. Rebecca, an aspiring filmmaker, decides to create a documentary of the duo meeting John (Peter McRobbie) and Doris (Deanna Dunagan). The initial introductions go well, but at night, the kids begin to notice their grandparents’ strange behavior. As John and Doris grow dangerous, the children realize that even senior citizens can be deadly.

Although the film is a dark comedy, Shyamalan can’t keep himself from packing in unnecessary dramatic plot points that are barely developed and go nowhere. Elements of family drama, such as the children dealing with abandonment issues after their father leaves, feel tacked on and inconsequential.

These irritating plot points tack more weird traits on the already obnoxious children. Tyler is a germophobe, while Rebecca has body issues, and these adds little to the story. These attempts to develop conflict would be admirable in a different film, but it’s difficult to take them seriously while a schizophrenic grandmother sprints around the house like a demon-possessed roadrunner.

Both McRobbie and Dunagan are great as the psychotic grandparents, both displaying different forms of insanity. McRobbie’s character is more secretive and subtle. Dunagan, however, is both the loudest and funniest of the pair, as she’s liable to be maniacal and make bizarre faces at the camera. Despite having little depth to work with, both child actors turn in lively performances. DeJonge’s pretentious attitude quickly becomes grating, and Oxenbould’s tendency to rap is cringe-worthy. Any comedic segments involving the two are punishingly long and take away from the fun.

The cinematography is impressive as Shyamalan proves his ability to master the despised method of “found-footage” horror. He eliminates the unfocused and messy camera work associated with the genre, and instead, works in beautiful shots that capture the characters’ moody, isolated house. While the “found footage” aspect is contextualized as being a part of Rebecca’s documentary, the gimmick doesn’t get old. Although a couple of moments seem ripped off from horror franchises such as “Paranormal Activity,” there have certainly been worse attempts to capitalize on this scary movie trend.

Of course, audiences heading into a Shyamalan horror film will walk in expecting a large, bombastic plot twist. Fear not, as it’s definitely present.

Although completely silly and somewhat illogical, the twist leads the story into a tense climax that perfectly mixes in the awkward humor with genuine fright as the two children work to escape from the old folks’ clutches.

“The Visit” may not be the masterpiece that revitalizes Shyamalan’s career, but it’s a step in the right direction. Horror fans may be left cold, as there are few moments that are truly frightening. But for those seeking to experience all the goofy enjoyment, such an odd premise will not disappoint.