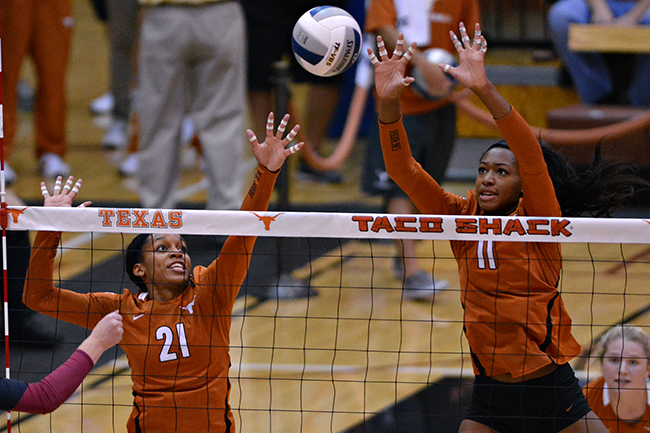 In a return to form for No. 4 Texas, the Longhorns cruised to a straight sets victory over unranked Santa Clara on Friday, improving their season record to 6-1. Friday evening’s matchup was the Longhorns second of the day, as they took down unranked UTSA by a score of 3-0 earilery Friday.

“A doubleheader is always a tough thing.” head coach Jerritt Elliot said. “Last week we were a little flat at the end of it, but this week we talked about it, and I thought they did a good job tonight of coming out prepared to play.”

The Longhorns struggled out of the gate against the Broncos, tallying seven attack errors in the first set, while compiling a kill percentage of just .146. But talent prevailed at the conclusion of the set for Texas, as the Longhorns went on a 9–5 run to win the set 25–21 after drawing even at 16 apiece.

“We needed to remember who we are and get back to the basics.” senior outside hitter Amy Neal said. “Our coaches talk about playing Texas Volleyball, and once we started doing that, everything became a lot easier.”

Following the sloppy first set for the Longhorns, they demonstrated why they’re ranked as one of the top teams in the nation in the second set. After getting out to a 13–3 lead, the Longhorns never looked back, steamrolling the Broncos en route to a 25-12 second set victory. Junior middle blocker Chiaka Ogbogu fueled the Longhorn's second set with 15 kills.

“I really credit Chloe [Collins].” Ogbogu said. “She sees the block really well and knows when to put all of the hitters into one-on-one situations.”

Despite the opportunity to close out the match and get some much needed rest, Texas found itself trailing Santa Clara 16-13 midway through the third set. The Longhorns looked lethargic for most of the set, but, following a kill from senior middle blocker Molly McCage to bring Texas within two, the Longhorns went on a 9-4 run to win the set 25-23 and the match 3-0.

The Longhorns will appear in the final match of the Texas Classic on Sunday, Sept. 13 as they face off against No. 14 Colorado State. It will be Texas’ final match before heading to Tuscon, Arizona for the Wildcat Classic on Friday, Sept. 18.