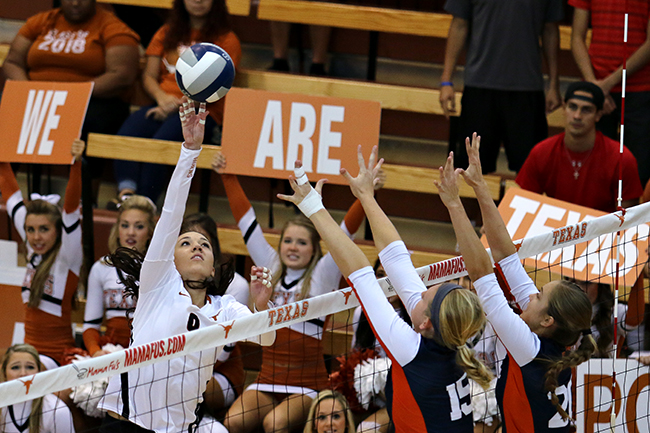 After No. 4 Texas’ loss to Florida last weekend, the Longhorns were ready to get back on the court and move on.

They had a film session that head coach Jerritt Elliott said “wasn’t pretty,” and they had a solid week of practice as they prepared for the Texas Classic at Gregory Gym. Friday afternoon Texas hosted UTSA in the first match of the weekend focused on improving from point to point.

“Our first match is going to be tough against UTSA,” head coach Jerritt Elliott said. “They’ve done a nice job and just upset Oregon, so this is going to be a very competitive match.”

Elliott was right. Despite a 3-0 sweep for the Longhorns, UTSA pushed Texas in the first two sets to put the Longhorns on notice.

The Roadrunners came out firing in the first set with big swings and an aggressive block. The teams were swapping points early, resulting in long rallies and over 20 ties. UTSA reached set point at 24-21, but Texas battled back with a 3-0 run to tie the set. Hustle plays on defense and four kills from senior outside hitter Amy Neal down the stretch helped the Longhorns win on the ninth set point, 31-29.

“I saw the level of competitiveness and thought ‘we’re not going to lose this game,’” Elliott said. “We took some big swings, controlled the ball a little bit better and when the game was on the line, we were good.”

Texas came out of the intermission poised and won the third set handily to clinch the match in sweeping fashion. The Longhorns registered a .424 team hitting percentage in set three, led by Neal’s seven kills with five more from Ogbogu. The Longhorns tallied three blocks, two from Baselovic, to keep UTSA’s team hitting percentage at .111 in the set.

“UTSA came ready to play,” junior setter Chloe Collins said. “It just took us a while to get in our rhythm and be focused.”

“As the match progressed we got a lot better,” Elliott said. “It’s nice to be able to see your team make those adjustments during the game. That was the big bright spot.”