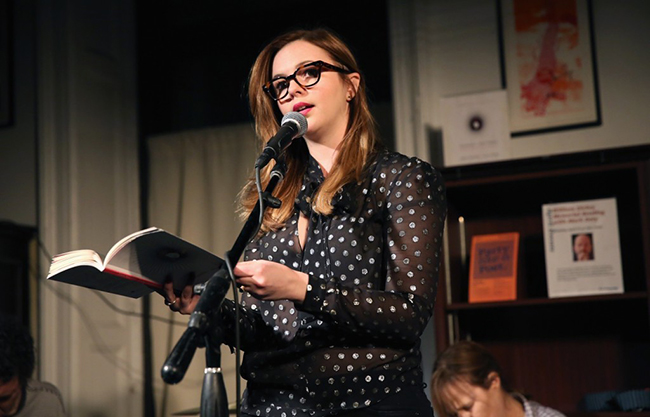 Poet and actress Amber Tamblyn and poet Derrick Brown are launching their fifth poetry tour together, “Sexcellence 5.0,” from the seat of Brown’s motorcycle. The duo will traverse the South for the next month, stopping in Austin on Wednesday at 7 p.m, at Spider House Cafe and Ballroom for a night of music, dance parties and comedy in addition to their poetry. The Daily Texan spoke with the duo about the show’s origins and what attendees can expect at Sexcellence 5.0.

The Daily Texan: Where did the name “Sexcellence 5.0” come from?

Derrick Brown: A lot of people probably already know this but poets are known for being good at making love. We thought it would be good to make a book called
“Excellent Sex for New and Accomplished Poets,” and we worked on that book for a long time, but for some reason none of the publishers wanted it. So, we decided that we would try and change the name of the book from “Excellent Sex” to “Sexcellence,” and still nobody wanted it. So, we started a tour with some of the pieces of the poems from that book.

DT: The show features readings from each of your books, but what else can the audience expect?

Amber Tamblyn: What we do is kind of a mix of many different things. Every show is going to be different. We will be reading from our books, and we’ll also tell stories and have small dance parties and give Q&A’s with the audience. Anything can happen. It really depends solely on what kind of audience we’re dealing with — if they are very pumped up and excited or if they’re kind of mellow and it’s a bunch of guys whose girlfriends dragged them to see this chick from “The Sisterhood of the Traveling Pants.” The staples [of the show] are the poems that we read and then everything else is improv.

DT: Who would you say is the target audience for these of shows?

AT: We want people to come and experience a poetry show unlike one that they are assuming they might see, or one that they have seen, or anything of that nature. All in all, it’s just a really fun experience that kind of pokes fun at the poetry show experience while also really giving a sense of freshness and uniqueness to a literary event which is usually very dry and not fun at all. So our hope is to communicate really good poems through a really good poetry show.

DT: Why did you choose to do the tour via motorcycle?

AT: The Sexcellence tour is not dependent on the motorcycles, although they do make it really fun. The first time that we did it, Derrick was moving out of Tennessee and I said “Hey, I’ll fly out there and help you move your shit across the state,” and we were like “Hey let’s turn that into a tour,” and that’s what we did. We had Derrick’s car pulling a U-Haul, and then there was Derrick’s motorcycle. Our friend Matt drove the U-Haul, and I rode Derrick’s lovehandles and hung on for dear life right on the back.

DT: Will there be another sixth Sexcellence tour?

AT: Nothing is ever off the table, but I think life has just gotten so much more crazy than it ever was before, and it is actually very possible it could be the last one. At least until we are in our eighties, then we’ll drive little motorized scooters and go across the desert with our canes, our Depends and our milk — big, tall glasses of milk.