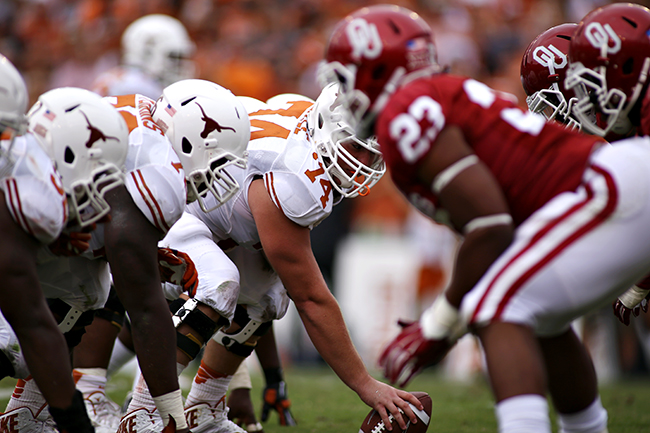 Oklahoma completes massive comeback
After falling behind 17-0 in the first half at Tennessee, the No. 16 Sooners stormed back and claimed a comeback victory on their opponent’s home field.

Oklahoma scored the last three touchdowns of regulation to send the game to overtime before redshirt junior cornerback Zack Sanchez picked off junior quarterback Joshua Dobbs to seal the win in double-overtime.

Following the win, head coach Bob Stoops said that the win was in the running for his favorite career victory.

TCU gets back on track
The No. 3 Horned Frogs struggled in their season opener against Minnesota, but it didn’t take them long to find their rhythm against Stephen F. Austin.

TCU scored 10 total touchdowns against the Lumberjacks on their way to a 70-7 win.

Senior quarterback Trevone Boykin threw for 285 yards and four touchdowns in the victory. His big performance was highlighted by a 60-yard touchdown toss to senior receiver Kolby Listenbee in the first quarter.

The Horned Frogs will finish out their non-conference schedule against SMU on Saturday.

Mahomes leads Texas Tech to second straight victory
Texas Tech continued its strong start on Saturday as sophomore quarterback Patrick Mahomes led the team to its second win with a 69-20 victory over UTEP.

The Red Raiders will get their first major test of the season this week as they head to Fayetteville, Arkansas, to take on the Razorbacks.

Baylor runs over Lamar
There was no shortage of rushing offense for No. 5 Baylor in its 66-31 win over Lamar. The Bears ran for 412 yards and five touchdowns in the blowout victory.

Junior running back Shock Linwood led the way for Baylor while racking up 130 yards and three touchdowns on the ground.

Through two weeks, Baylor ranks No. 3 in the nation in rushing yards and No. 1 in total offense.

The Bears will look to keep their College Football Playoff push alive against Rice on Saturday.

Iowa State loses rivalry game to Iowa
For the second time in the last three years, Iowa took home the Cy-Hawk trophy with its 31-17 victory at Iowa State.

For Iowa State, senior defensive end Dale Pierson picked up two sacks in the losing effort. He leads the FBS with five sacks this season.

The Cyclones will look to rebound against Toledo on Saturday.