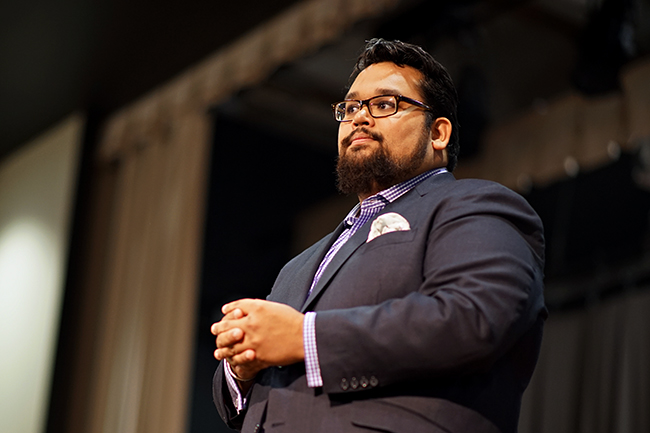 Vijay Gupta, Los Angeles Philharmonic violinist, spoke Tuesday about how classical music can be used to elevate the homeless and inmates from suffering while drawing attention to their struggles.

Gupta gave the presentation as a part of the UT Center for Music Learning’s Distinguished Teachers Series. He began his talk with a violin solo — the same solo he plays for inmates and homeless individuals in Los Angeles.

“San Julian is the epicenter of the homeless capital of the United States,” Gupta said. “There are 7,000 new homeless showing up to shelters on skid row every week.”

Gupta told the story of Nathaniel Ayers, a classically trained double-bassist whose paranoid schizophrenia forced him to drop out of the Juilliard School of Music and ultimately left him homeless. Gupta said Ayers taught him an important lesson.

Gupta said there were times he feared for his safety, but the community and other musicians came together to bring music to those who need it most and force people to examine the issues by drawing them in through the common ground of music.

“As a musician, I never thought I would be involved in politics or activism,” Gupta said. “But we can actually use our work as a platform to say, ‘Something important is happening here.’”

Bob Duke, professor in the School of Music and director of the Center for Music Learning, said Gupta showed how music can transcend traditional boundaries to create change.

“For a lot of our students imagining what a life in music can be like, seeing models of artists who have made a contribution beyond music-making can be a great thing to see,” Duke said.

“What really strikes me is his passion and his vulnerability for the cause,” Palese said. “You can see him get emotional, and you can feel that.”

Gupta said students could work against homelessness by routinely volunteering at a community shelter.