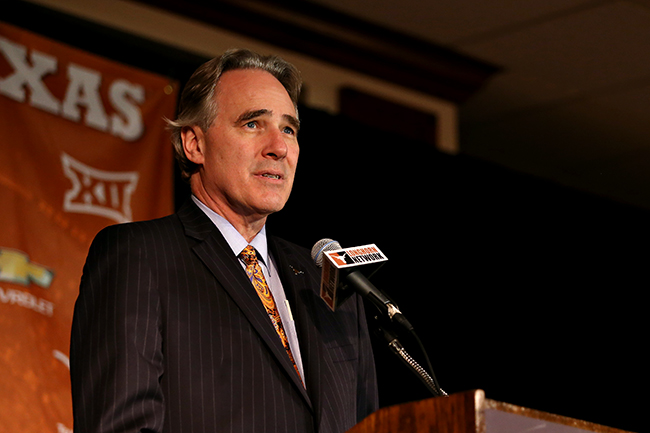 Athletic director Steve Patterson has been fired, according to multiple reports Tuesday morning.

A report by the Austin American-Statesman said that Patterson will meet with university president Greg Fenves this morning to work out terms of firing before making the move official.

The move to fire Patterson comes after a tumultuous couple of months for him. The athletic department reported a net loss of $8.1 million in the 2013–2014 fiscal year. To reverse that trend, Patterson upset fans with increases in season ticket prices for football and basketball, with as much as a 7 percent increase according to the report. Patterson also had trouble internally, firing football sports information director John Bianco, who has yet to be replaced.

Last week Fenves told the Statesman editorial board that he and Patterson were working through some issues. Before the home opener on Saturday, a plane circled Darrell K Royal-Texas Memorial Stadium with a banner saying “Patterson Must Go.”

Patterson was hired in December 2013 after long-time athletic director DeLoss Dodds stepped down after 23 years.

Within his first few months on the job, Patterson made waves by hiring Charlie Strong, the school's first African-American head coach, in January 2014 after Mack Brown resigned the month before. Patterson also forced out men's basketball head coach of 16 years Rick Barnes to resign after Barnes failed to make changes to his coaching staff. Barnes was replaced by Shaka Smart in April.

Perrin, who will reportedly take over the interim job, played for Texas under legendary coach Darrell K Royal in 1968. The former linebacker is currently an attorney in Houston.

Patterson will likely be paid the $5.6 million remaining on his contract according to the report.