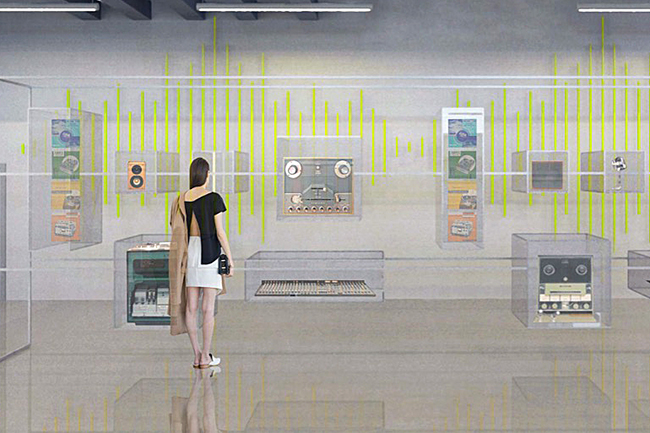 Interior design senior Raquel Torres was awarded a $30,000 scholarship from The Angelo Donghia Foundation after entering her project, “Museum of Magnetic Sound Recording,” into the Donghia competition.

Interior design experts and educators judged Torres’ portfolio at the competition. Torres is the tenth UT student to receive the Angelo Donghia Senior Student Scholarship in Interior Design, according to the UT School of Architecture.

According to Tamie Glass, associate professor of interior design, Torres was one out of 14 students in the nation to receive this recognition.

Torres said her project focused on designing the inside of a museum that would house vintage recording devices.

“I approached my design with the goal of making the museum interactive,” Torres said. “I wanted to create a series of glass envelopes and boxes that would hold vintage records, machines and listening booths. There was still the invisible boundary of glass between the guests and exhibit, but it is much more interactive than a museum where you just stare at objects.”

Torres initially created her project as an assignment for a design class where students had to practice working with clients, Glass said. Torres’ client was Martin Theophilus, the president of the Museum of Magnetic Sound Recording, a nonprofit organization dedicated to preserving methods of sound recording.

The Donghia competition, available to participants by invitation only, is a senior scholarship restricted to students majoring in interior design and in their third year of school, Glass said.

“This means that this competition contains the best of the best,” Glass said. “Being able to combine an interesting concept about display with good representational drawing skills has allowed Raquel to distinguish herself amongst her peers and win the competition.”

Even though the Donghia competition is over, Torres’ design will be utilized when the Museum of Magnetic Sound and Recording has enough funding to create a permanent facility, Theophilus said.

“If you look at vintage museums around the world, so many of them are just comprised of shelves with equipment that isn’t working,” Theophilus said. “It is important that the interior design complements the exhibit. Raquel has achieved this goal by creating a museum that lets people see equipment from all different angles. Trying to combine a studio atmosphere with a museum is hard, but Raquel has succeeded in doing so.”