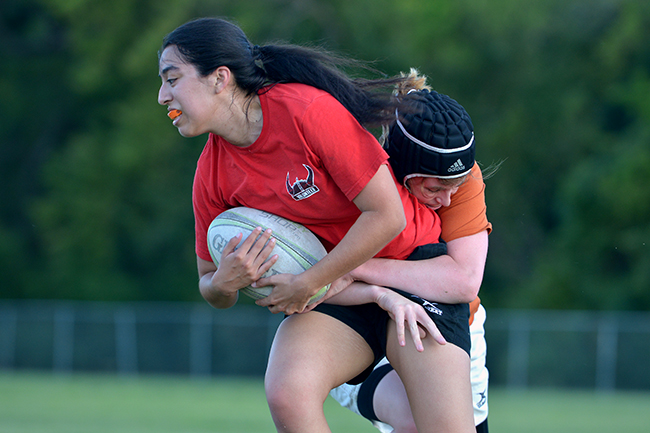 In one of the first meetings of the season, head coach Pattie Adams sat her team down and gave it a choice — to consider 2015 a building season and play for fun or play competitively and make a run at qualifying for nationals in the fall.

In her first semester as head coach, Adams guided the Longhorns to the USA Rugby College Sevens National Championships in May. But Texas lost many of its veteran players to graduation soon thereafter and now works with a much younger roster this fall.

“All the veterans coming off of nationals thought maybe this year would be a building year, but everyone is really gung-ho about competing at nationals,” said Hanae Islam, undeclared sophomore and treasure. “Even all our rookies have a really competitive drive.”

As the sport’s popularity rises, club rugby is appealing to players with no prior experience, especially on college campuses. With a variety of skill levels present, the rookie class is ready to make an impact on the pitch this season.

“Attendance is super key and really giving it your best at practice,” public health freshman Bou Silla said. “You really need to work outside of practice, but if you’re enjoying it, it’s not a bad thing.”
The new players’ desire to put in the necessary work to learn and contribute has proven to be an asset to the team thus far into the fall season, Adams said.

“I actually don’t think I’ve seen a group of rookies jump in with both feet and really take to it as quickly as this group,” Adams said. “We have about 12 who are brand-new to the sport, and they are really putting in the effort and the work to learn and catch up to their veteran peers.”

The veterans will also play a key role as Texas pushes for a national championship qualification in women’s fifteens this fall. With an influx of new players, the more experienced players’ knowledge of the sport is imperative to the growth of the rookies on the field.

“The veterans are helpful, approachable — making sure the rookies feel welcomed,” Adams said. “They’re providing opportunities outside of practice to watch rugby, talk about rugby and make it feel like a family.”

These opportunities will become more important as Texas prepares for a busy fall schedule, with its first cup match against Texas A&M in College Station on Sept. 26. While keeping their eyes on a trip to the championships at the end of the semester, the Longhorns are also keeping in mind the reason they started playing to begin with.

“More playing time means the more experience people get, and it means that people get to do more of what they love,” Islam said. “Of course we want to win, but we also want to develop that team bond and make sure that everyone finds a home in rugby.”