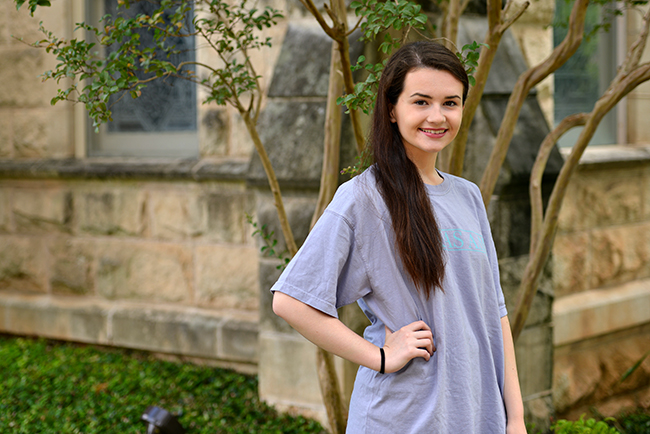 When she’s not juggling a 22-hour course load, radio-television-film freshman Maddy Parkinson spends her time in a world of goddesses and a full-on dystopian rebellion.

On Sept. 2, Parkinson released her debut novel, “Castigation,” as an e-book through Amazon Digital Services, Inc. The 420-page science fiction novel is the first installment of her trilogy entitled “Aremihc.”

“Castigation” is available for $2.99 on Amazon.com and will be available in print in the coming months.

Similar to “The Hunger Games” and “Divergent,” the novel follows the journey of a young woman, Saskia Wires, who rebels against the violent distopian society of Luella where she faces genetically modified monsters.

“I had nightmares when I was growing up about creatures with ink and stars on their skin,” Parkinson said. “It used to help me deal with the nightmares to write about it, but I didn’t begin to seriously draw upon these ideas until I was about 14.”

Originally born in Melbourne, Australia, Parkinson attended high school in Hong Kong, where she wrote most of the book. The hardest challenge, Parkinson said, was finding time to complete the novel between her intense high school courses.

“I’d finish school, and while I took the train home, I’d sometimes type little passages on my phone or scribble bits of dialogue on paper that I just had to get out of my head before I forgot them,” Parkinson said. “I’d get home, eat dinner and do homework for a few hours, and then I’d sit at my desk and set a goal for myself. I’d say: You can’t go to sleep until you’ve written 3,000 words.”

Although Parkinson has been writing since she was a young girl, she said she never intended to make her work public.

“I just felt this drive to get the world trapped in my head down on paper,” Parkinson said. “Parts of the story would bounce around in my head, and my fingers would twitch because they wanted to be typing, but they couldn’t because I was in class. Publishing the story didn’t cross my mind until much later.”

Midway through her junior year of high school, Parkinson searched for a publisher until she met Deborah Gilbert of Soul Mate Publishing. Gilbert partnered with Parkinson in early 2015, and the two are working on releasing the print version of the book later this year.

Besides entertaining readers, Parkinson hopes her novel will shed light on the minority groups she feels are underrepresented in modern teen novels. The main character of the novel is bisexual and plus size. Gay and transgender characters are present throughout the story.

“There’s a lacking representation of certain troupes, characteristics and minorities in young adult literature,” Parkinson said. “So I made the decision to write ‘Castigation’ with characters that are as diverse as possible.”

Now, Parkinson bounces ideas around with her friend, English freshman Carlee Maurier, for part two of the “Aremihc” trilogy, which she hopes to release in late 2016.

“Maddy’s dedication and ability to pull readers in and her way of telling interesting and fresh stories are major skills she possesses,” Maurier said. “Her persistence and way with words certainly made any publishing company want to have her.”

Up until the publication date, Parkinson said, very few people knew she was working on her novel. Now, she said, she takes pride in seeing others enjoy her novel.

“At first it was hard because when I was querying, nobody would take me seriously because of my age,” Parkinson said. “But now, when I talk to people who have read it, it’s as if they know the characters like I do.

Before, they only existed in my head.”