Students write, direct, perform play in four days for ‘Once Upon a Week’ 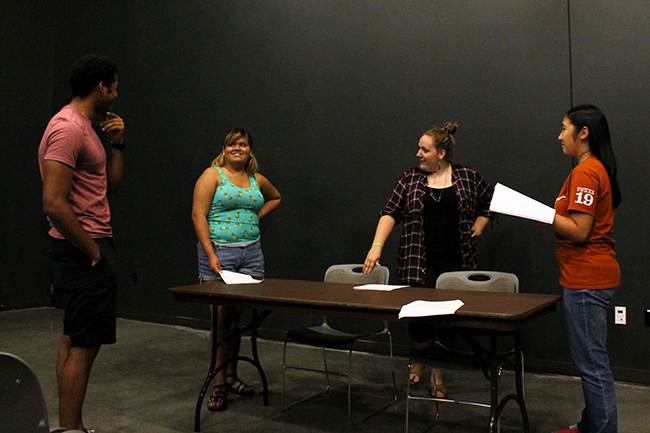 Students scramble to type out a story line, manage a group of actors and remember their parts as they work through the process of writing, directing and performing a play — all within the span of four days.

Groups of students will perform in “Once Upon a Week,” a production of short plays hosted by Creative Arts + Theatre, at 7 p.m. Thursday at the Black Box Theatre in the SAC.

Minerva Hernandez, psychology senior and show producer, said “Once Upon a Week” provides an opportunity for students from all disciplines to engage in theater through a short-term project. The production welcomes students who may not gain exposure to the arts on a daily basis by allowing anyone who is interested to participate. This year, Hernandez accepted all 46 students who applied.

“In academics, you don’t get a chance to let your creativity flow,” Hernandez said. “Even if you go watch a play, for that hour you’re not at UT, you’re in the moment and watching the scene unfold.”

For “Once Upon a Week,” students split into groups that include a writer, a director and three to four actors. Writers provided a first draft of their scripts Monday and turned in final edits Tuesday night.
Hernandez said writers have creative freedom to write about any topic, provided they keep it family-friendly.

Rehearsals for the show took place Wednesday, with one hour allotted for each group to practice. Hernandez said participants are discouraged from meeting up and rehearsing outside their one hour but can practice their lines individually. On the day of the performance, actors can use their scripts and improvise during their eight to 10-minute play.

“‘Once Upon a Week’ provides the space for actors to experiment because it’s safe, and everyone knows that we are making it up as we go,” Hernandez said. “Part of the fun is that we don’t know what’s going to happen.”

Xavier Durham, economics sophomore and a writer for one of the plays, said the majority of audience members from last year’s show came from the college of engineering and the college of natural science. Durham said he believes it’s important for students from traditionally non-artistic majors, such as the STEM fields, to participate in the arts.

“We live in a world where we downplay the arts,” Durham said. “That’s what really emphasizes creativity and problem solving. The arts are a big component of what we need to cultivate cognitive thinking and the
understanding of how the world works.”

Sandy Lam, a Creative Arts + Theatre chair and an actress in the production, said she decided to try out directing in last year’s production. She said the experience eventually led to her writing and directing a musical, “How to be Super.”

“A lot of people come to us without theater experience saying, ‘I just like to write,’ or, ‘I just like to sing,’” Lam said. “We want to empower people to eventually continue with leadership roles, and maybe they could also go on to write and direct a musical.”

This year, Lam said she is eager to see how taking on an acting role will help her learn and grow.

“I’m an introvert, and it’s really hard for me during auditions because I’m afraid of everybody in the room, and I get nervous,” Lam said. “Something that I want work on is how to socialize with others and work as a team instead of shouldering the responsibility and being a lone wolf.”

Lam said despite having to stretch comfort zones and put in long rehearsal hours, being part of any theater production is ultimately rewarding.

“You put on a show with the people you’ve worked together with, and at the end of it, you’re really proud,” Lam said. “No matter how short the show is, you’re always transformed in some way.”