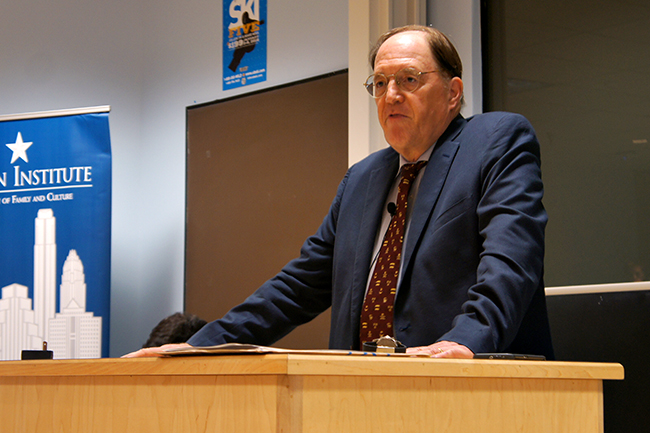 The national proposition to raise the minimum wage was the subject of a debate between a UT professor and a Texas A&M professor in front of a student-dominated audience Wednesday.

The professors discussed their opposing perspectives regarding a possible $15 minimum wage for Texas, although no formal legislation was mentioned. The Austin Institute For the Study of Family and Culture co-hosted the event with the Texas Economics Association, a student-run economics committee.

Kevin Stuart, executive director of the Austin Institute and moderator of the event, chose UT government professor James Galbraith, a supporter of the policy, and A&M economics professor Jonathan Meer, an opponent of the policy, to participate in the debate.

“We will all think better about the issue at the end of the debate than we did before,” Stuart said. “We will also get to see two people model how civil debate and discourse should happen.”

From a national perspective, Seattle recently increased their minimum wage to $15 an hour, and Los Angeles and the state of New York have also proposed increases. With the $7.25 minimum wage being challenged across the country, Galbraith and Meer took turns presenting their perspectives on the issue.

While Galbraith said the increase of minimum wage is positive for reasons such as re-establishing a level of fairness in the economy, Meer said the proposal is “wishful thinking.” The increase in minimum wage is the wrong policy for the noble goal of reducing the poverty level, according to Meer.

Galbraith said that increased salaries would enable workers to pay off their debts.

The event intended to shed light on a prevalent issue rather than orchestrate a heated argument, Stuart said.

Economics sophomore Prarthana Neotia, vice president of the Texas Economics Association, said she believes there are benefits and consequences of raising the minimum wage, but wonders if an increase will encourage people to shy away from honing their intellectual skills.

“I think pushing it up might have dire consequences because it could encourage people to be a cashier as opposed to doing something more with their life,” Neotia said.

Marisa McKnight, an economics and Japanese junior, said she had not thought about a minimum wage increase in terms of the competition that would result from higher wages.

“I was surprised at the level of competition that might come from the $15 an hour minimum wage,” McKnight said. “I hadn’t thought about it that way before.”