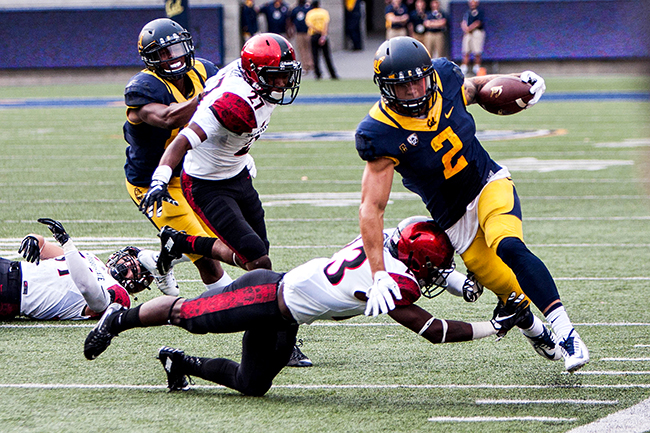 Before the Golden Bears suit up for practice, he’s there. After practice, when it’s time to read textbooks and solve math problems, he’s still there. He’s in the weight room before anyone else, and he’s there when everyone has left. He was recruited by California before coaches, players and fans knew what he would become. After more than three years in the Golden State ­­­– playing for the Golden Bears – senior running back Daniel Lasco returns to his home state to play the team that didn’t even recruit him.

“Anytime you go home and you’ve got people that are going to be there that you know that are family and stuff, it makes it a little bit more special,” said offensive coordinator and running backs coach Tony Franklin. “I’m sure it’s a special trip for him to have a lot of people get to come and see him play that haven’t seen him play.”

It’s been a while since Lasco played in Texas. From 2007-2011, he donned a green, red and white jersey from The Woodlands High School. When they do see him play, he will look different. He’ll still be the same kid who works hard and leads by example. But he will be different.

Lasco gained 15-20 pounds of muscle in three years. As a result of bulking up, Franklin says he’s now one of the strongest guys in the weight room. Franklin arrived at California in 2013, so he wasn’t there to witness Lasco’s improvement from his freshman year to his senior year. But he was able to watch the exponential growth from last year to this year. But what led to the leap Lasco took in skill? Maybe it was, as Franklin put it, he had a lot of reps and a lot of chances to improve his craft. In his junior year, Lasco rushed for 1,115 yards on 210 rushes. He scored 12 touchdowns. He got better.

“He understands how to finish runs better,” Franklin said. “He’s a dynamic run finisher now, and you know, he’s a 210, 215-pound kid that can finish runs. That’s pretty amazing when you can run as fast as he can and finish the way he does.”

Lasco’s numbers were great last season, but it’s one number that led to that performance. It’s the number 10,000, and it stands for the 10,000-hour rule California preaches.

“There’s a saying that when you put in about 10,000 hours of something, that’s to a point where you master it,” sophomore running back Vic Enwere said. “So you keep going until you get to 10,000 hours.”

Working on something for 10,000 hours seems impossible.

“But it’s the idea that you keep working for the pursuit of perfection,” Enwere said.

Maybe it’s because of his mindset to achieve perfection that Lasco has become one of the best running backs in the nation. Saturday night at Darrell K Royal – Texas Memorial Stadium, he has 60 minutes to show Texas what it missed out on. He’s worked 10,000 hours for these 60 minutes.