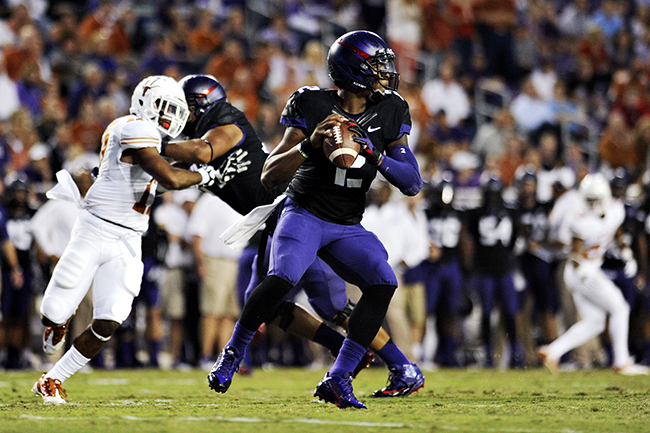 1. Nick Chubb, Georgia RB
2015: 309 yards on 35 carries, 2 TD
This week: vs. South Carolina
Chubb ran all over Vanderbilt last week for 189 yards on 19 carries. Although he didn’t get into the end zone, he was a key factor in Georgia’s 31 points. He’s currently averaging 8.8 yards per carry, and as Georgia’s offensive line improves, I  believe that number will go up. This weekend against South Carolina, the Bulldogs will look to avenge a loss that possibly cost them a playoff spot in 2014. I expect Chubb to shine and continue rising in the Heisman race.

2. Derrick Henry, Alabama RB
2015: 243 yards on 31 carries, 6 TD
This week: vs. Ole Miss
Henry only needed 96 yards to score three touchdowns for the Crimson Tide in its win over Middle Tennessee. He works perfectly in Alabama’s run­-centered system and will continue to rack up the touches and yards. The Tide is also looking to avenge a 2014 loss, and Henry will need to be lights-­out if they want to get the victory. He is crazy strong when he runs and has great acceleration, so I think he’ll find his way through Ole Miss’ defense and right to the top of many Heisman lists.

3. Trevone Boykin, TCU QB
2015: 44­-of-­69, 531 yards, 5 TD, 2 INT
This week: vs. SMU
Boykin showed off his arm against Stephen F. Austin last week, throwing for 285 yards and four touchdowns with one interception. It was good to see him sit in the pocket and control the game without needing to scramble, thanks to a solid performance from his offensive line. As TCU starts to play tougher teams, I think Boykin will continue to improve and lead his team well.

4. Ezekiel Elliott, RB / Cardale Jones, QB – Ohio State
2015: 223 yards on 38 carries, 4 TD
This week: vs. Northern Illinois
Ohio State has several possible Heisman candidates, but Elliott is my top Buckeye contender. He ran for 101 yards and three touchdowns in Ohio State’s easy win against Hawaii last week. Elliott is hard to bring down and great at finding holes, and he shows that every game. Cardale Jones is a still a contender, but as long as he continues to swap snaps with J.T. Barrett, he shouldn’t be put over Elliott.

5. Leonard Fournette, LSU RB
2015: 159 yards on 28 carries, 3 TD
This week: vs. Auburn
The only reason I left Fournette off last week’s list is because LSU’s game in Week 1 was cancelled due to bad weather. I’m glad he earned his way back on after his 2015 debut. Fournette put the Tigers on his back in their win over Mississippi State, notching a career­-high 159 yards and every LSU score. He’s powerful, fast and awfully tough to bring down. Behind a solid offensive line, Fournette will continue to put up big numbers and work his way up a lot of Heisman lists.