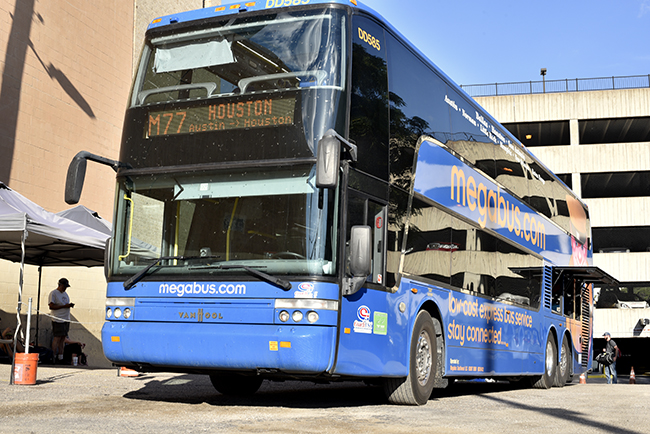 Megabus will remain in Austin after City Council rejected an appeal against a proposed downtown location for Megabus on Thursday. The council unanimously rejected the appeal but added conditions to Megabus’ permit, including requiring signs to be respectful of neighbors and to be quiet after 10 p.m.

Megabus, which provides low-cost bus services, plans to move its Whitis Avenue terminal — its only location in Austin — to a location at San Jacinto Boulevard and 15th Street .

The city’s planning commission approved a conditional use permit for Megabus’ new location in June, but the permit was appealed by Libby Bernhard, a nearby condo building owner, who does not want Megabus to operate on the property.

Sean Hughes, Megabus and Coach USA director of corporate affairs, said the terminal is being relocated downtown to provide greater amenities to riders, such as a more central location and indoor waiting areas.

Hughes said besides the apartment complex, there are no other residential buildings around.

Urban studies junior Frank Onuorah said although he doesn’t use Megabus, many other students rely on Megabus to travel home and without it they may not have other transportation options.

“I see [Megabus] as just enough of importance to potentially thousands of students who do use it that I have to be against the appeal,” Onuorah said.

The planning commission placed 16 conditions when issuing Megabus’ permit back in June, including requiring indoor restrooms and prohibiting bus activity from 4 p.m. to 6 p.m. Monday through Friday.

Libby Bernhard, owner of the apartment complex next to the proposed terminal, said she appealed the permit because of the adverse impacts like loitering and illegal parking in her lot which were not addressed by the planning commission’s conditions.

Bernhard came up with amendments to some of the planning commission’s conditions, including licensed security personnel, installation of a fence and a change in hours of operation from the current 6 a.m. to midnight, to 8 a.m. to 10:30 p.m.

“Peace and quiet, that and location was all we had to offer at our little old place and now that’s gone,” Bernhard said.

The council approved the permit with modified conditions to require signs on site to be respectful of neighbors.

Eric Goff, board member of AURA — a local grassroots organization that advocates for accessible transportation and housing — said he needs Megabus to commute to Houston for business trips.

“Megabus is an essential service for a lot of people to get between cities in Texas and even further away,” Goff said. “It’s important for something like that to be in downtown or in the central part of the city so that people can easily access it.”