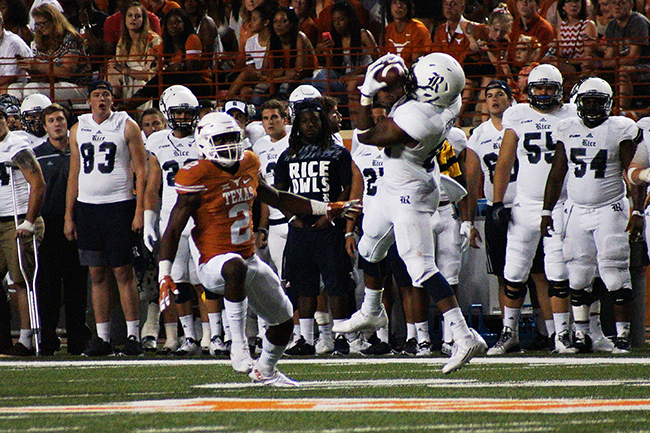 Texas’ freshman class has a certain swagger. The talented young group talks a big game, and they bring it, too — freshman cornerback Kris Boyd epitomizes his class’ swagger and confidence. His teammates emphasize that it doesn’t matter whether it’s practice or game time, Boyd makes his presence felt with both his mouth and his play.

“[Boyd] has a ton of confidence,” junior defensive tackle Hassan Ridgeway said. “He is one of those dudes you are going to have to watch. He is an energy dude, just like Peter [Jinkens]. They are one in the same breed. They are always talking. They are always bringing juice.”

With his attitude, Boyd brings a crucial element to the Longhorns’ locker room. In the midst of a long-term rebuild, Texas will have its ups and downs. The players have emphasized that the team was emotionally let down when things went wrong last year, and that the negativity yielded problems on the field. If Boyd’s energy and positivity prove contagious, the Longhorns are less likely to fall victim to the same emotionally driven fate. While Boyd is not listed as a starter and only plays limited downs, he’s shown a knack for making his playing time count. He was one of the few sparks in Texas’ season opening loss at Notre Dame, as he and fellow freshman linebacker Breckyn Hager made multiple big hits while covering punts on special teams.

“Boyd was unbelievable in the kicking game,” head coach Charlie Strong said following the loss.  “The thing about him is on the kickoff I have these two guys who are going to be really great players here.”

Boyd saw more opportunities against Rice and made an even bigger impact. He registered two tackles, but made one of the game’s biggest plays while laying a massive hit on Owls’ redshirt senior quarterback Driphus Jackson, which led to a fumble returned for a touchdown. Following the big play, there was no surprise when he let his teammates know about it.

While Boyd has been eased into playing time so far, he has no shortage of potential. Standing at six feet tall, he has the size to cover taller receivers and the athleticism to stick with speedsters and pure route runners. Most importantly, he believes in his skills and itches for more opportunities, despite still needing improvement.

“He’s a guy who believes he should start, which I love,” defensive coordinator Vance Bedford said. “That’s what you want in a defensive back — he wants to be out there. He’s going through some learning curves right now …  it’s on-the-job training.”

Boyd has already made a name for himself in his first two games, but he’s just one of many in Texas’ talented freshman class. Alongside other freshman stars, like linebacker Malik Jefferson and cornerback Holton Hill, Boyd has the chance to lift Texas’ defense back to a dominant level in the coming years. For now, he’s focused on bringing energy and making plays when his number is called.