Longhorns survive in five sets against No. 16 Arizona 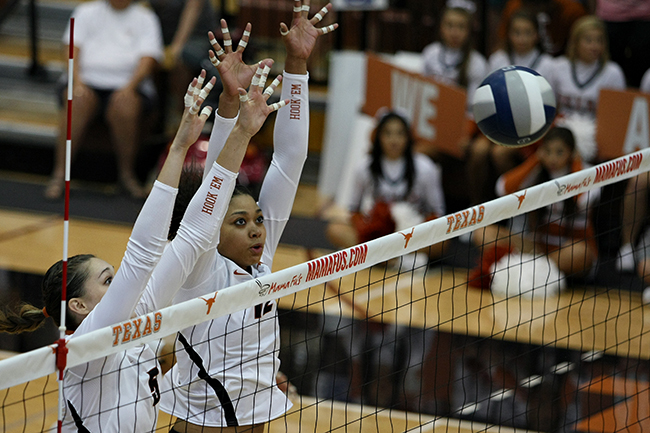 No. 2 Texas took the court for the fifth set Friday night against No. 16 Arizona tied at two sets apiece after dropping the fourth set, 25-20. The Longhorns faced the Wildcats in their second match of the day, a match on Arizona’s home court in Tucson, Arizona.

With a raucous crowd on hand at the McKale Memorial Center, the Longhorns had their backs to the wall as they headed to the fifth set. After falling behind 2-0 in the final set, Texas rallied off eight immediate points to take a commanding 8-2 fifth set lead. Arizona attempted to make a late push to steal the set, but the Longhorns held on to win the set 15-6, and the match, 3-2.

For the Longhorns, Friday’s matchup was their fourth with an opponent ranked in the top 20 of the national polls this year, previously going 2-1 in those matches.

As for the match itself, Friday’s face-off with the Wildcats provided the Longhorns with some of their best play of the season and some of the highest statistics of the players' careers. Both senior outside hitter and Amy Neal and senior middle blocker Molly McCage recorded career highs in kills, registering 24 kills and 14 kills respectively. Another bright spot for the Longhorns was junior setter Chloe Collins. Collins was all over the court against the Wildcats, as she recorded her fourth double-double of the season with 10 digs in addition to a career-high 63 assists.