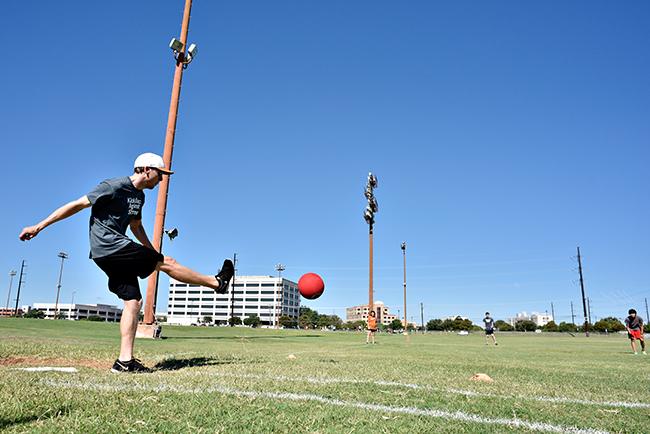 Sixteen teams signed up to participate, and donations were taken for the Brian L. Harlan Memorial Endowment, which funds suicide prevention resources on campus.

Marian Trattner, suicide prevention coordinator for the CMHC, said she has been involved with the event since its start in 2009. Trattner said National Suicide Prevention Day is Sept. 10, but the center chooses to host the event later, when students are more involved on campus.

“The goals of the week include raising awareness of suicide and suicidal behavior in college students,” Marian said. “Also, for helping [to reduce] the stigmatizing of mental health and suicide. It serves as a kickoff event and call to action for the school year.”

Pharmacy freshman and veteran Robert Stewart said the meaning behind the event is very personal to him because he has firsthand experience with suicide while serving in the military.

“Exactly four months four days ago, my brother who was in the U.S. Marine Corps committed suicide,” Stewart said. “He was only 27, … and I lost a solider exactly one month and one day after my brother. It’s really a very, very sensitive topic that needs to be addressed because a lot of people are afraid, and I just want to show my support and be there.”

Neuroscience freshman Alli Reibach said she thinks offering fun events to participate in is a great way to get people involved.

“I thought it’d be like a really fun community event,” Reibach said. “I feel like it’s a good idea to have a bunch of cool things to draw people to this cause.”

Trattner said the topic’s awareness is important not only for those struggling with suicidal thoughts, but also for friends and family. She said CMHC offers many resources and advising to students for that reason.

“We offer free workshops to any student group on campus to learn about the warning signs of suicide and refer them to the counseling services on campus,” Trattner said.

“Two-thirds of students first talk to their friend or family member before seeking professional help, so it’s important to create awareness.”

If you or anyone you know is considering self-harm, here are University and community resources: