Longhorns look to cut down on mistakes before conference play 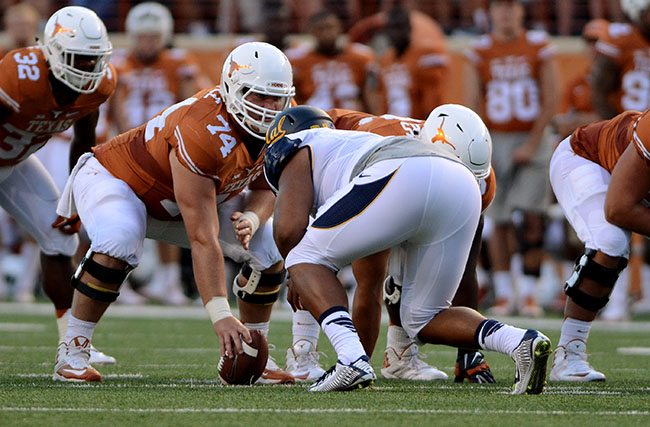 The Longhorns still have a lot of room to improve.

Texas broke out with an electrifying performance in its 45-44 loss to California, yet the Longhorns held themselves back with numerous mental mistakes. With stout Big 12 competition looming, Texas will have little room for error.

“It’s all the mistakes that we’re making,” head coach Charlie Strong said. “We’re doing it to ourselves. … It comes back to fundamentals and technique.”

The Longhorns burned themselves against the Golden Bears, drawing yellow flags early and often. In total, Texas committed 10 penalties for 93 yards. The offensive line alone committed five. The Longhorns can’t afford to kill drives with penalties — instead, they need to emphasize sustaining long drives and keeping opposing offenses sidelined.

“We know that if we want to have success, we have to eliminate penalties,” senior center Taylor Doyle said. “I never want to be detrimental to my team when I’m out there. I want to be helpful. We know there’s no room in football for holding calls.”

While the Longhorns are a young team and expect growing pains, it was the veterans who committed some of the most costly penalties against California.

First, junior safety Dylan Haines was ejected for targeting a receiver’s helmet. Then, senior guard Sedrick Flowers cost the Longhorns 15 yards with a late hit. Strong doesn’t want to point fingers at his veterans, but he said the team can’t make those mistakes.

Aside from penalties, the Longhorns also struggle with pure execution. Through three games, Texas’ defense chronically suffers from missed tackles and blown assignments — especially against the run. With an inability to contain inside runs combined with poor tackling, the Longhorns know that their opponents will continue to test them.

“Coach is putting us in the spot to make plays, and there are some gaps guys just can’t get in,” freshman linebacker Malik Jefferson said. “We know guys are going to try and run it down our throat because they have seen our last three games. Now the challenge is to stop the run.”

The Longhorns also stress trust as a means of righting their mistakes. Senior defensive tackle Desmond Jackson emphasized the defense’s need to expect success instead of anticipating others’ mistakes and trying to do too much. He said the team makes its best plays when they come together and execute individual assignments.

Although Texas’ defense continues to struggle with the same issues, its offense flashed new mistakes against the Golden Bears. Specifically, two turnovers and multiple dropped passes plagued the otherwise-potent unit. Even though the offense showed immense potential in its 44-point outing, eliminating mistakes will be key to winning in conference play.

“At the end of the day, we didn’t do enough,” said Jay Norvell, the wide receivers coach who oversees play-calling. “We grew as a team, and we got to learn from the mistakes that we made and correct them so they won’t happen to us again.”

Fortunately for Texas, the miscues mostly come down to execution and focus — not a lack of talent or chemistry. Both players and coaches preach that the mistakes are correctable. Now, it’s about translating those fixes to the field.

“We need to get back to winning games, and we’re focused on doing the things every day to get there,” Doyle said. “We’re excited to have a clean slate with the Big 12 now.”