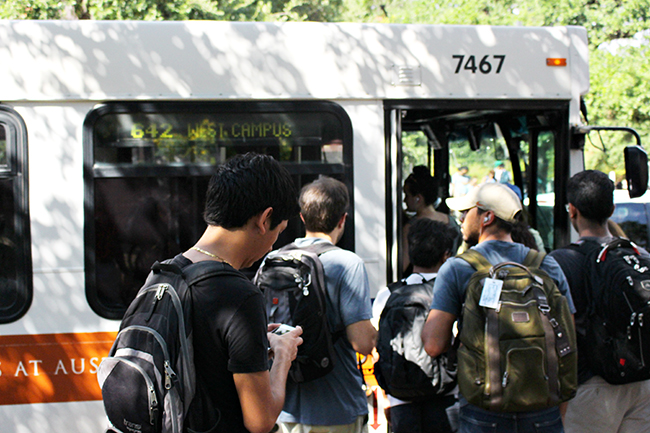 The West Campus UT shuttle bus route will not see an increase in service any time soon, despite the crowded conditions during peak hours, according to an official at Capital Metro.

Amy Peck, communications specialist at Capital Metro, said Capital Metro is aware of the crowding problem on the West Campus shuttle route, but limited funds and increased service costs prevent the transportation service from adding more buses to the route.

“[W]e are actually in an agreement with UT, and from year to year, we basically receive a certain amount of funding from that service, and from year to year, the cost of it goes up for just providing that service,” Peck said. “So that necessitates that we provide service to the most popular routes, and we can only do so much with the resources that we have at this time. But we are aware of [crowded UT buses].”

Peck said Capital Metro and UT officials keep in regular contact, but she said they have not found a solution to provide more service along UT shuttle bus routes.

“In our regular conversations with UT, if there’s a way to provide more service, we’ll certainly do that. But we just haven’t had the ability to do that yet,” Peck said.

“I think there are way too many students in West Campus that need rides,” Nunu said. “I get on the bus at the first stop, which is 27th and Nueces, and often we will get past the second stop and not be able to pick people up, especially in the mornings, and that’s when people need rides most. … [Students] that are furthest away are the ones that don’t get rides.”

Exercise science senior Kassy Gomez said instead of increasing the number of West Campus buses, some of the seats could be taken out to create more standing room and fit more people on each bus. Gomez said she believes both services and students are to blame for the crowded conditions.

“Some people don’t have bus etiquette, where they just put their bag on a seat and don’t squeeze in when people are trying to get on the bus, so I feel like it’s an all-around problem between students and services available,” Gomez said.

Peck said students will see more of the blue city buses on UT routes as Capital Metro transitions the orange UT shuttle buses out of use.

“Based on the fact that those UT shuttle buses date back to 1997, and they’ve lived out their lives, and so, as we can, we’re replacing them with Capital Metro-branded or Capital Metro-looking vehicles,” Peck said.

UT students can ride any Capital Metro service for free with their student ID. Peck said she encourages students to look into other bus options besides the UT shuttle buses when commuting.

“The one thing that we do want to make clear to UT students is because they have the free ability to use Cap Metro services, regardless of what the service is, they don’t have to just rely on UT shuttles in that part of town, they can take a regular bus — we certainly encourage that.”