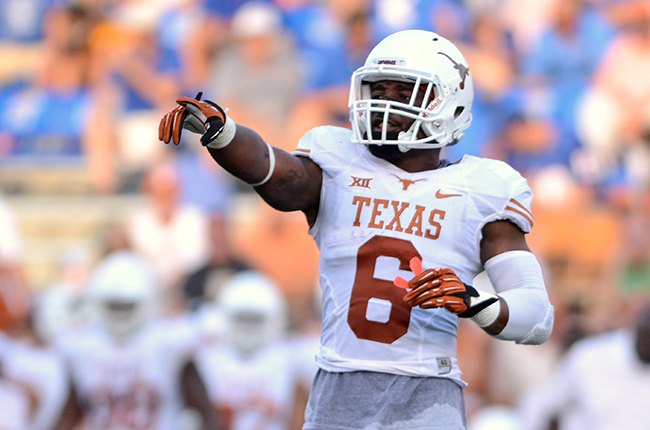 Two weeks of the 2015 NFL season are in the books, and plenty of Longhorn rookies have gotten significant playing time.

The New England Patriots selected defensive tackle Malcom Brown with the No. 32 pick in the 2015 draft. Brown made an instant impact for the Patriots in their season opener against the Steelers, getting the first sack of his NFL career and the first sack of the 2015 NFL season. After two games, Brown has a total of three tackles and one sack.

Linebacker Jordan Hicks was selected in the third round of the draft by the Philadelphia Eagles. Hicks was primarily used as a special teams player, but he played on the defensive side of the ball Sunday against the Cowboys after an injury to Eagles linebacker Kiko Alonso. In that game, Hicks hit Cowboys quarterback Tony Romo, breaking Romo’s clavicle.

The New York Giants selected safety Mykkele Thompson in the fifth round of the draft and had him train primarily with the first team defense for the majority of training camp. However, Thompson suffered an Achilles’ tendon injury in the preseason, forcing him to sit out the entire year.

The Detriot Lions took cornerback Quandre Diggs in the sixth round of the NFL Draft. Diggs was a leader for a Texas defense that was No. 2 in the Big 12 in total defense last season. After proving himself a standout at training camp, Diggs played 18 snaps in the season opener against the San Diego Chargers, which is his older brother Quentin Jammer’s former team. Diggs totaled two tackles and gave his game jersey to his brother. However, he didn’t record any tackles in week two against the Vikings.

Tight end Geoff Swaim stayed in Texas for his professional career after being selected in the seventh round by the Dallas Cowboys. Swaim was the leading receiver for the Cowboys’ second preseason game with four catches for 57 yards. He remains as one of four tight ends on the Dallas Cowboys 53-man roster, behind Jason Witten, Gavin Escobar and James Hanna.