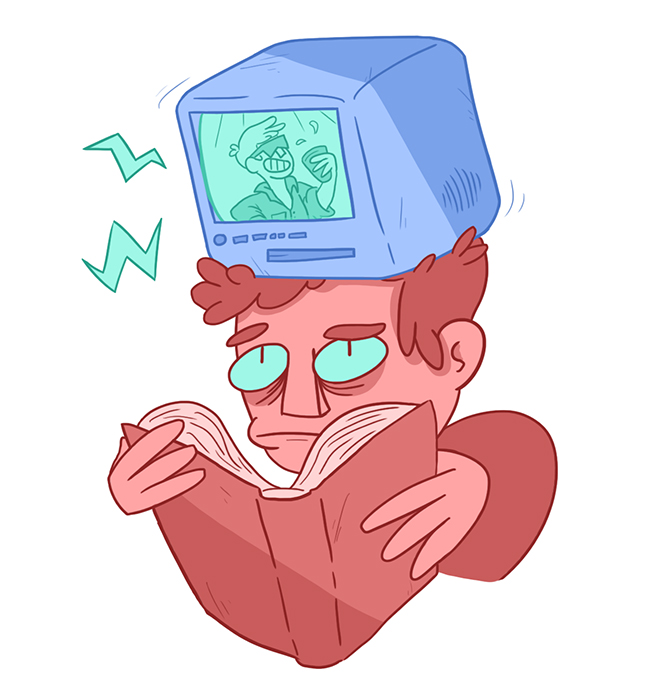 Popular media has a pervasive and universal effect on how people view the world around them. Even though most movies, TV shows and advertisements are not depictions of real people or events, they shape our expectations of how the world works.

And so, any student who has gone to a college party might see similarities between movies about college life and the real thing. From students on one end of the party shouting “Chug! Chug! Chug!” to students on the other end playing beer pong, it really can seem like the movies are actually accurate. But is that because the movies portray college life or because people who go to parties portray what they see in the movies?

“College really should be a space for figuring out who you are and what you want, apart from what your parents want you to want or what your friends want,” Mickenberg said. “Students need to learn to think for themselves.”

Despite the social and media pressures against them, some students manage to think independently while avoiding risky activities. Biology freshman Nneka Iheanacho said that even though “the media sets unrealistic expectations for incoming students,” she has not consumed alcohol or drugs because of the negative effects they could have on her body.

Yet one of the reasons it can be so difficult to avoid media influences is the way alcohol is advertised to students. Alcohol companies stand to gain significant profit from college students — the average student spends $500 a year on alcohol alone. However, alcohol is also the most commonly used drug by college students nationwide, despite the fact that thousands of students die every year due to alcohol-related incidents.

Mickenberg notes that companies advertise to college students regardless of “whether or not they are legal drinking age.” Even if the drinking age is too high, it’s ethically questionable that alcohol companies would target their ads at people who aren’t even allowed to use their products without breaking the law.

Whether they come from the ads running during a football game or the newest movie at your local IMAX, the ideas that media puts in our minds influence our actions and beliefs. Students should try to break free of these influences and figure out what they really want out of their time at UT. Whether it’s binge-drinking at parties, binge-watching Netflix in bed or biking around the city at one a.m. on Saturday, everyone has their own ways of enjoying their time.

It’s essential to the college experience to embrace whatever that way is, instead of just blindly following the crowd in an effort to “fit in.”