Forum: “Protecting those who will change the world” 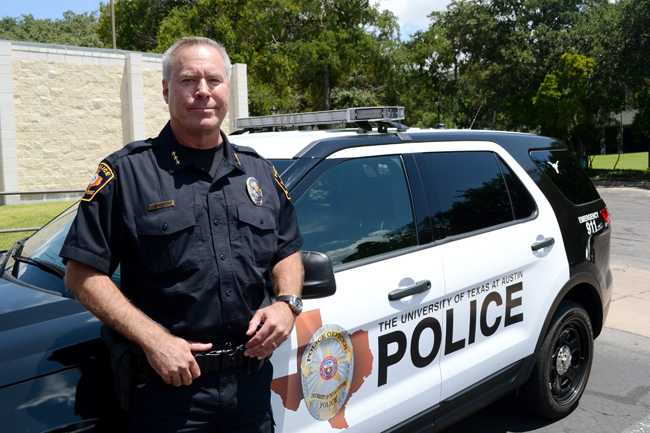 I have been asked by The Daily Texan to share my thoughts from a police perspective as to what has changed during my tenure as Chief of Police and to talk about recent challenges. First and foremost, The University of Texas at Austin remains a vital, safe and encouraging place to learn and work. The University is clearly growing rapidly with the addition of many evolving programs, including the Dell Medical School. At the same time, the greater metropolitan area around us continues to attract some 160 people a day. Such rapid growth and change can present challenges to police.

This past summer, as you are aware, we received a number of complaints about both the conditions and behavioral activity west of campus. The summer saw a marked increase in the homeless population frequenting the surrounding area, many of which were thought to have migrated from the downtown area and other cities. A particular challenge that went beyond the visible “quality of life” concerns involved a somewhat dramatic uptick in the use of synthetic marijuana (K-2). We shared your concerns with the City of Austin and have sought to partner with them where it is feasible. UTPD officers working collaboratively with APD, as well as with those serving the homeless community, quickly grasped the devastating effects K-2 has on individuals and the impact to the areas surrounding campus. Local media has reported on the number of homeless individuals who have been transported to hospitals with sometimes life-threatening symptoms and the concern of antisocial and/or delusional behaviors. In recent weeks, both UTPD and APD have made arrests of persons coming into nearby off-campus areas with intent to sell the dangerous drug.  Following those arrests, anecdotal reports by officers and others indicate a drop in the availability of the dangerous substance. I certainly hope the decreasing trend continues, but we will need to remain vigilant.

I wish to thank those of you who have reached out to our officers when you observed something amiss. Whether it was an off-campus issue when you see people acting in a threatening manner (related to above) or whether someone you know has had too much to drink and may be at risk of sexual assault or in medical distress, we appreciate the calls. As the UT-Austin “Be Vocal” and the joint UTPD/APD “Be Safe” campaigns urge, when you see something of concern, make a call. Collectively, we have a real opportunity to affect our world for the better.

Additionally, your interactions with us when we are not on a call for service are truly appreciated. We are not unaware or immune to the national political discussion on the legitimacy of police in today’s society and the important discussions about police “use of force” or the interaction with communities of color. While the rhetoric has been, at times, troubling, we remain steadfast in our mission to keep our campus community safe and to achieve our vision “to be respected and trusted by all segments of UT’s diverse community.” The entire UT-Austin community deserves nothing less. Clearly the police have not achieved that vision across all communities, but I am confident that with your support, honest dialogue and interaction with officers at times when we are “off call,” we will continually get closer. The UTPD motto is “protecting those who will change the world.” Please continue to “be vocal” and “be safe,” and you will change our world.

David Carter is the Chief of UTPD.