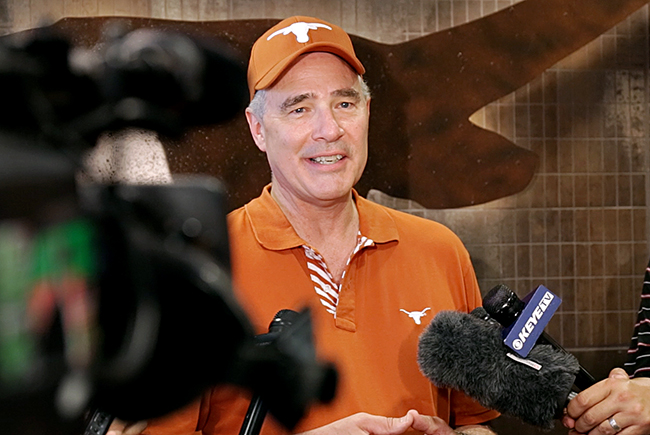 The details of the resignation are not yet available, but the Board announced that athletic department funds will pay for his settlement. When an agreement is reached between Patterson and the University, the information will be released to the public.

“We needed authorization from the Board of Regents on the terms,” Fenves said. “We have that now, so we’ll finish it up expeditiously.”

Patterson resigned on Sept. 15 after just 22 tumultuous months on the job. He oversaw a net loss of $8.1 million for the department in the 2013–2014 fiscal year, and his actions to reverse that trend — raising season ticket prices for football and basketball — were unpopular among fans and boosters.

Patterson also had trouble getting along with Fenves. Two weeks ago, Fenves told the Austin American-Statesman editorial board that he and Patterson were “continuing to work through the issues.”

Fenves said he doesn’t have a plan to begin a search for a new athletic director but Perrin “has been fabulous” in his first week on the job.

The firm hired former president William Powers Jr. as a counsel for the Austin law firm on Aug. 3. Powers currently serves as a distinguished professor for the UT School of Law, and Regent Wallace Hall said Powers’ employment at the University’s outside legal counsel is a conflict of interest.

Dan Sharphorn, System vice chancellor and general counsel, said at the August meeting that Powers working for the law firm would not be an issue.