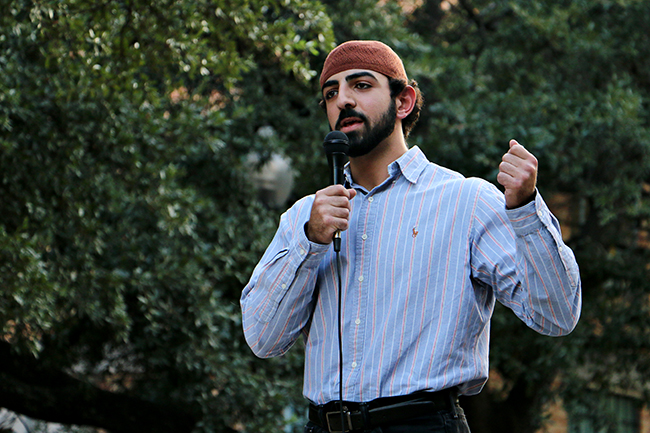 In front of the Martin Luther King Jr. statue on the East Mall, a group of students and community members gathered Wednesday to protest racism and anti-Muslim attitudes in the U.S.

The Palestine Solidarity Committee sponsored the demonstration, which was promoted through a Facebook event. The protest was inspired specifically by the arrest of Irving teenager Ahmed Mohamed, who was arrested earlier this month after bringing a homemade clock to school that teachers thought was a hoax bomb. The protest also addressed American attitudes and mistreatment of Muslims and minority races, according to Mohammed Nabulsi, committee member and second-year law student.

“We are here not only to protest the deplorable treatment of this young student [Ahmed Mohamed], but to contextualize and historicize this event,” Nabulsi said. “We are here to remind the Austin and UT community that UT-Austin plays a critical role in perpetuating racism and violence across Muslims all across the world.”

The rally featured eight scheduled speakers and devoted time for other students to share their opinion. The speakers consisted of UT professors and students who had prepared statements or poetry to read.

Senan Shaibani, who works with multiple activists group on campus and was arrested at the rally against police brutality in downtown Austin last week, said justice is central to Islam and that is why he attended the demonstration.

“The goal in rallies like this is collective liberation,” said Shaibani, Middle Eastern studies and philosophy senior. “That’s what’s most important, just for us all to be free. Islamophobia in particular is rampant across America. Not to take away from any other racism, but it’s an issue. My dream for the future is one day my kids will be able to be Muslims without having to explain themselves.”

Aerospace engineering sophomore Carly May, who was eating dinner outside the SAC during the rally, said she had not experienced the effects of racism or anti-Islamic attitudes but respected the rally’s message.

“The cool thing about UT is to see people standing up for what they believe in,” May said. “I certainly don’t think it’s wrong to bring up publicly what’s bothering you. It’s cool that we’ve had something like this and so many people have come out to support it.”