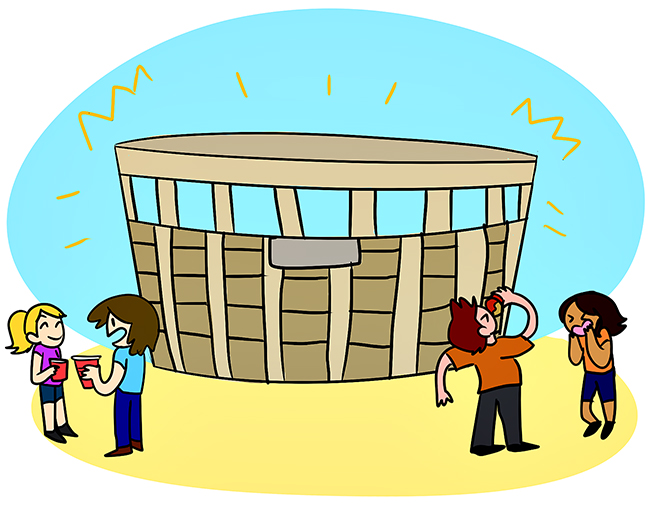 “Win or lose, we still booze” can be heard throughout campus on game day. Having a few drinks before games has always been common practice around the UT campus, so when UT’s under-21 students lost their drinking privilege in 1986, Daily Texan reporter John Russell was quick to fire back.

“Only a drunkard can enjoy a night of Longhorn football,” Russell said.

Since the drinking age changed from 18 to 21 in Texas during the fall of 1986, UT students have managed to sidestep campus laws and acquire alcohol before every home football game. In his article, Russell responded to a threat by campus police to “crack down on alcohol use” by newly declared minors at Texas football games, stating he and fellow students would “get as thrashed” as usual.

Russell then offered his fellow underage drinkers a guide on how to drunkenly enjoy some Texas football.

“Step one: buy a fifth of Jack Daniels for every person going with you,” Russell said. “You’re college students. One day you will have to solve problems in the real world, and if you can’t figure out how to sneak a fifth of whiskey past those decrepit old guys who tear tickets, then the future of this country is seriously bleak.”

Russell acknowledged the new drinking age might pose a challenge for students under 21 trying to buy liquor, so he offered a solution.

“Easy enough, the oldest-looking one in your group should march right into any local liquor store and act like he owns the place,” Russell said.

Furthermore, he advised students to enter Darrell K Royal-Texas Memorial Stadium five minutes late after “knocking back a six-pack of suds before kickoff.”

He also made sure to remind students to be as loud and obnoxious as possible while locating their seats. Tips including “drink heavily,” “cheer your ass off,” “stand by your team while you scream for blood” and “finish up the alcohol” riddled the last few steps of Russell’s guide.

Almost 30 years later, game-day culture has changed — but not by much. Many students still see alcohol as a gameday necessity. Ben Whitaker, science and technology management sophomore said he and his friends drink on game days before kickoff in celebration of being Longhorns.

“Game day, for me, consists of shotgunning cold beer with all my buddies before the game,” Whitaker said.

Tailgating plays a prominent role in fans’ gameday rituals. Whitaker said students typically drink before the game begins instead of knocking back fifths inside the stadium.

“No one I know really drinks at the actual game,” Whitaker said. “It all happens at the tailgates.”

“I don’t drink before games or at all, to be honest,” Janke said. “My gameday ritual consists of my friends and I grabbing dinner on the Drag and just hanging out before the game. And after every game, we all go get pancakes at Kerbey Lane Cafe, and we have a great time.”

Russell wrapped up his article with some final words of wisdom for his readers: “By the end of the game, deliriousness should be setting in. Your jokes are no longer funny, the people around you are tired of your belligerent behavior, and buddy, you smell. Go home!”