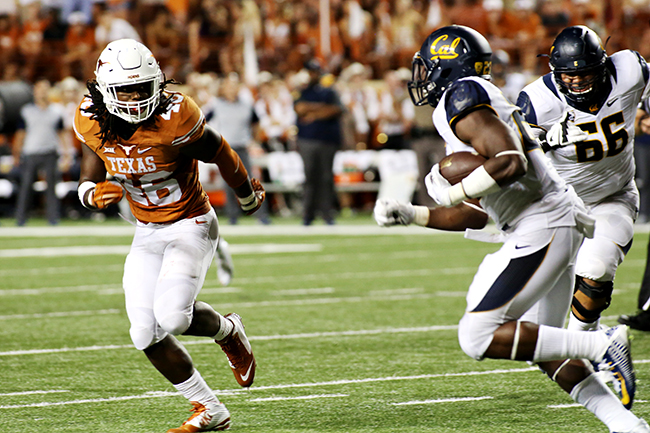 In Greek mythology, a universal storyline drives each tale. A hero emerges, with great ability and competence. The hero encounters a challenge, the action rises and a tragic flaw – colloquially, the Achilles heel – derails the hero’s journey. In response, a hero, with the help of mentors and friends, works to overcome this seemingly fatal flaw. Often, tragic heroes are predestined failure by the gods. The lesson then lies in the journey.

Texas’ season follows this storyline. The hero – the Longhorns collectively – shows great aptitude: The team finally has a talented quarterback in redshirt freshman Jerrod Heard. The offensive line has drastically improved its protection. Special teams players show glimpses of big plays and a determination to capitalize. Even the defense secured three interceptions and two fumble returns – one of which stud freshman linebacker Malik Jefferson took to the end zone.

The action is about to rise. With conference play opening Saturday vs. Oklahoma State, Texas’ chance to meet its goal – a Big 12 championship, according to head coach Charlie Strong – begins now. Nos. 3 and 5 TCU and Baylor loom ahead on the journey. The rival Sooners, currently No. 15 in the nation, also pose a threat to both the Horns’ record and their pride. Even the Cowboys are 3-point favorites for this weekend.

And like every good tragic hero, Texas struggles to topple its Achilles heel — the third quarter. To be fair, the Horns have improved since last year. The Longhorns scored just 23 third-quarter points in all 13 games last season. They already have 24 this season. But against Cal last week, the Bears outscored Texas 21-0 in the third. Including the 2 minutes immediately before halftime, Cal’s run produced 31 unanswered points.

The Longhorns have improved their opening game since facing then-No. 11 Notre Dame in Week 1. In South Bend, Indiana, the Fighting Irish scored 17 points before Texas made it on the board. And even then, the team’s entire scoring output was a single field goal in the third. Only against Rice did Texas score a touchdown – actually three – in the third quarter. The anomaly reflected the opponent’s weakness more than it did Texas’ skill.

“Third quarter, 21 points. Fourth quarter, zero points,” senior defensive tackle Desmond Jackson said Monday. “We all came together as a unit. The consistency has to change…we got to stop making excuses about saying, ‘This shouldn’t have happened.’ We got to go out there and make sure it doesn’t happen again.”

Historically, Texas has a chance. Opponents outscored them 55-23 in the third quarter last year, but in 2012 and 2013, Texas outscored opponents 92-85 and 103-83, respectively. The upperclassmen can remember those days. The freshmen need not worry about the past.

Texas has emerged as a hero. It showed competency against Rice and met challenges against Cal. Heard’s 527 offensive yards even felt like a scene from a myth or dream. Now, the rising action begins with conference play. Against Oklahoma State, we’ll see what the football gods destined.