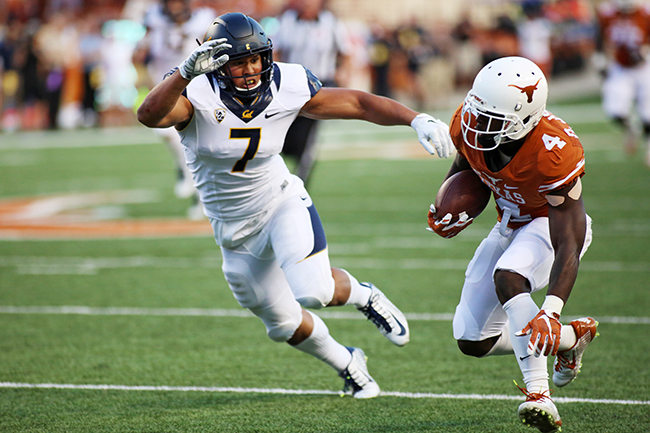 The Longhorns are fielding an offensive renaissance. Redshirt freshman quarterback Jerrod Heard is doing his part, however, he’s just one part of the offensive rebirth.

Texas’ receiving corps is playing a crucial role in the team’s offensive turnaround. The unit has emerged as a reliable group while consistently creating separation and making things easier for Heard. More importantly, they’re making big plays and picking up big chunks of yardage.

“We call [the receivers] our horses on the outside, our animals,” Heard said. “When you have an animal like that, you can throw the ball up and he’ll go get it.”

The Longhorns’ wideouts caught six passes for gains of 15 or more yards against California. The group also averaged more than 18 yards per reception. With speedy playmakers on the outside, head coach Charlie Strong believes big plays will be the norm.

Within the speedy group is senior receiver Daje Johnson, who leads the team in receptions and receiving yards through three games. Johnson thrilled Longhorns fans last Saturday, torching California’s defensive backs for three different receptions over 25 yards.  His big plays are sparking drives and leading to scores. Johnson, however, has impressed the coaches with his newfound maturity rather than his playmaking.

“[Johnson’s] just working his tail off, and I think for the first time in his life, football is his priority,” said Jay Norvell, wide receivers coach and offensive play-caller. “He loses a day of his senior year every day he comes here. He’s taken advantage of it…and it’s starting to show in his play.”

Aside from Johnson, Texas’ receivers are younger than their production indicates. Sophomore Armanti Foreman and freshman John Burt both start despite their inexperience. Yet both have emerged as reliable and explosive targets. With six catches each, Foreman and Burt lead the team in yards per reception with 18.8 and 30.3, respectively. They each have the athleticism to climb the ladder and make plays in one-on-one situations.

“Being a receiver, you just try to make plays,” Foreman said. “No matter where the ball is thrown, you just have to go up and make a play.”

Heard credits his chemistry and passing success to the offense’s work ethic. He said the quarterbacks and receivers regularly stay after practice to get extra repetitions. He emphasized that the extra work helps him anticipate his receivers’ decisions and location on the field.

The resurgence in the receiving squad is developing at a crucial moment. The current group still has a long way to go, but regardless, it’s a promising start.

“How we played from Cal, how we showed everything, used our athletes, used the plays that the coaches had set up for us, executed those plays,” Johnson said. “Once we continue to do that, it will be great.”