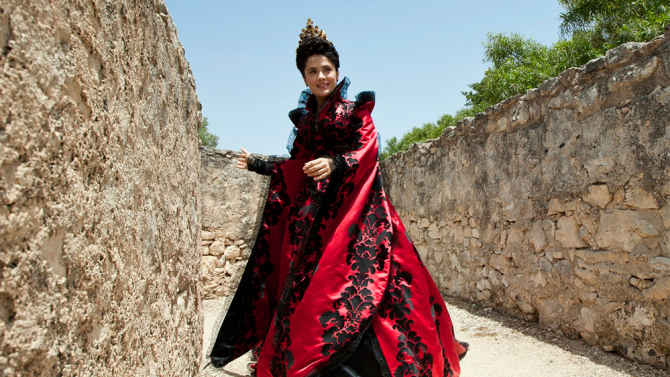 It would be a mistake to think “Tale of Tales” is a wannabe Disney film: there’s little that is wholesome or satisfying about this fantasy picture. Directed by Matteo Garrone, the film loosely weaves together three classic fairytales by the Italian poet Giambattista Basile and sets them in a dark, twisted world filled with monsters and magic.

Garrone’s English-language debut, “Tale of Tales” features a long list of familiar faces, excellent cinematography and astounding production design. It is one of the few adult-oriented films of its genre — and a stellar one at that.

“Tale of Tales” explores the lives of three monarchs in three neighboring kingdoms. The first story, set in a country called Longtrellis, concerns an infertile queen’s (Salma Hayek) deal with a mysterious necromancer (Franco Pistoni) which allows her to have a son — at the cost of her husband’s (John C. Reilly) life.

The second takes place in Highhills, where the king (Toby Jones) devotes his attention to a flea rather than his daughter, the Princess of Highhills (Bebe Cave). When the Princess asks to be married off, the King of Highhills accidentally makes her the bride a frightening ogre (Guillaume Delaunay).

The third is in Strongcliff, where the promiscuous king (Vincent Cassel) mistakes an old woman, Dora (Hayley Carmichael), with a lovely singing voice to be a young maiden and attempts to sleep with her. When a witch de-ages Dora (Stacy Martin takes over here), she must decide whether to become the king’s wife or stay with her elderly sister.

The cast, particularly Hayek and Cave, play their roles well. Hayek serves up a controlling, occasionally unhinged, Queen of Longtrellis that is ultimately redeemed by her love for her son. Meanwhile, Cave subverts expectations by turning in a powerful performance as a damsel-in-distress turned heroine.

While these stories have magic, monsters and mystique, they are firmly grounded by an understanding of the human condition. Characters in each story grapple with selfishness and love, causing conflicts to arise.

The Queen of Longtrellis refuses to let her son spend time with his best friend and keeps him to herself, inadvertently driving the boys closer together. The King of Highhills invests time into the flea as one would into a hobby, failing to balance his personal pursuits with care of his child. Dora wants sexual satisfaction from the King of Strongcliff, abandoning her sister in the process. These characters fail their tests as mothers, fathers, and siblings, and they receive due punishments.

“Tale of Tales” is a didactic picture, and its lessons are timeless. Of all its stories, Dora’s may be the most socially relevant: it deals with obsession with youth and the lengths people will go to reclaim the years they have lost.

Shot by cinematographer Peter Suschitzky, the film looks gorgeous and, when it needs to, repulsive. Although vibrant colors and practical costumes, creatures and sets pop out of the screen, when it comes to digital effects, “Tale of Tales” stumbles. The CGI is poorly done for some of the monsters, and the digitally enhanced shots look like they came out of a cheap TV production.

“Tale of Tales” is a strong showing by Garrone. His take on Basile’s works is imaginative and emotionally resonant, elevated by fantastic production design and a wonderful cast. Fantasy films done this well are a rarity, and “Tales” is one of those gems.

See more of the Texan's coverage of Fantastic Fest here.