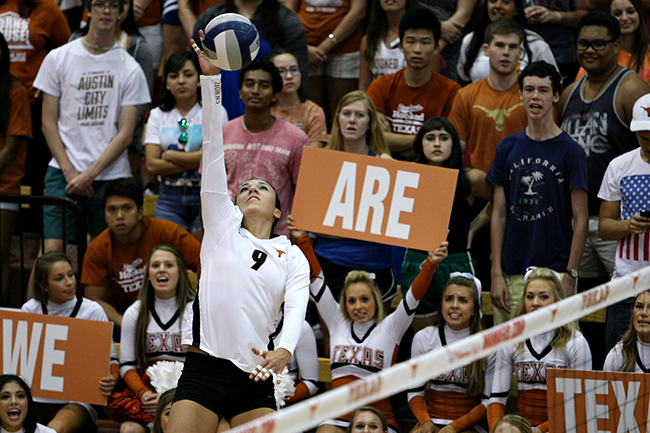 In its second conference match of the year, No. 2 Texas took down unranked West Virginia on Friday, defeating the Mountaineers in straight sets. The victory was the eighth consecutive for the Longhorns and their ninth straight-set win on the season.

Friday’s match in Morgantown, West Virginia, was the farthest the Longhorns have had to travel this season. It was just the second time Texas has had to leave the confines of Gregory Gymnasium, previously only traveling to Tucson, Arizona, for the Wildcat Classic.

“It’s a good first road win in the Big 12 for us,” head coach Jerritt Elliott said. “I thought we were steady, and I liked the way we approached the match.”

Texas got out to a fast start early against the Mountaineers, streaking out to a 10-4 lead behind two kills apiece from junior middle blocker Chiaka Ogbogu and senior outside hitter Amy Neal. As the set continued, the Longhorns’ lead grew as they maintained a superb .385 kill percentage, compared to West Virginia’s .034. West Virginia fought to keep it close, but the Mountaineers failed to keep pace as Texas took the opening set 25-16.

As has seemed to be the case for the Longhorns throughout much of the 2015 season, Texas’ second set was much of the same in Morgantown as the Longhorns got out to another quick lead. It was smooth sailing in the match’s second frame, with the Longhorns taking it by a score of 25-17. Junior setter Chloe Collins was integral in the Longhorns second-set victory, racking up 20 digs through the first two sets.

There were no troubles in the third set for Texas, as an 11-6 lead gave way to a 25-16 win. Freshman outside hitter Yaasmine Bedart-Ghani was a key bright spot for Texas in the match, notching a career-high seven kills in addition to a hitting percentage of .700. Bedart-Ghani, the outside hitter from Los Angeles, California, appeared in her fourth-ever collegiate match Friday and received her first-ever start.

“I felt really good, especially in the last set with my blocking,” Bedart-Ghani said. “I think it was a lot better. Also, hitting on the right side has gotten easier with practice.”

Texas’ next match will be Saturday, Oct. 3, against Iowa State at Gregory Gym in Austin.