Five thoughts from the game — Texas vs. Oklahoma State 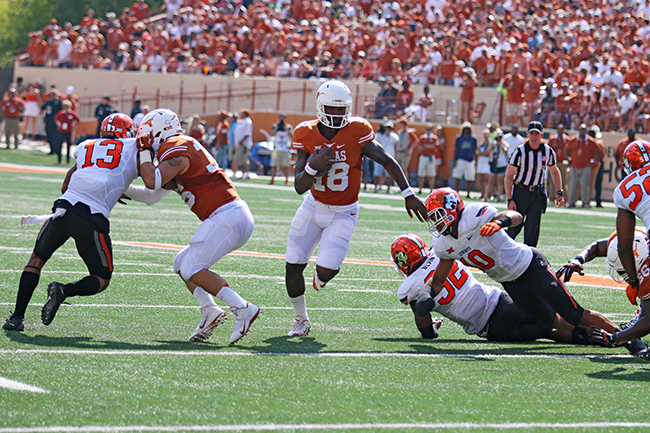 The Longhorns appeared to be back last week against California. Then they weren’t.

Saturday was the same story. Texas was poised to upset Oklahoma State. Then it didn’t.

Swoopes, there he is (again)

Junior quarterback Tyrone Swoopes lost his starting role with the emergence of redshirt freshman quarterback Jerrod Heard. Heard finished 9-for-17 with 119 yards passing and no touchdowns.

Swoopes entered the game late in series with short yards to gain. Swoopes ran for 12 yards on his first attempt and amped up the crowd by pounding his chest and waving his arms. His next rush attempt went for 16. His third rush attempt only went for seven yards but led to a touchdown.

Early in the game, Oklahoma State sophomore quarterback Mason Rudolph surgically picked apart the Texas defense with slant after slant, which led to first down after first down. The Cowboys finished 9-16 on third downs, and the Longhorns allowed 395 yards. Texas’ youthful defense bounced back after being tested early. The defense scored two defensive touchdowns — junior defensive tackle Hassan Ridgeway recovered a fumble and returned it 34 yards for Texas’ first touchdown. In the second half, freshman cornerback Holton Hill returned an interception 41 yards for a touchdown. Junior safety Dylan Haines recorded Texas’ third turnover when he intercepted Rudolph early in the fourth quarter.

The Longhorns kept shooting themselves in the foot and seemed to shoot down chances at big plays. A penalty negated a touchdown pass from junior wide receiver Marcus Johnson to freshman wide receiver John Burt on a double-pass play because Heard threw a forward pass to Johnson to set up the trick play. Junior defensive tackle Paul Boyette Jr. was penalized for roughing Rudolph, and that denied an interception from freshman cornerback Kris Boyd. Senior wide receiver Daje Johnson and others on Texas’ receiving corps dropped passes that could have led to big plays.

Earlier in the week, Rudolph said DKR would be a hostile environment. Even with the stadium emptier than usual, it was a raucous crowd, and the Longhorns fed off the hysteria. Head coach Charlie Strong was often visibly excited, and the Texas bench flared with emotion on turnovers and big plays. The fans’ noise fueled the Longhorns’ motor. The excitement had returned.

The old adage says that lightning doesn’t strike the same place twice. At Texas, the Longhorns were on the wrong side of that phenomenon. Oklahoma State forced Texas to punt the ball late in the game, with the score tied at 27-27 and the ball deep in Texas’ territory. Freshman punter Michael Dickson fumbled the snap and, in a panic, tried to recover and punt the ball away. He did. But he punted with his left foot and the ball didn’t travel as far as it needed to put the Cowboys out of field goal territory. A missed extra-point is a blunder that rarely ever happens. Fumbled snaps don’t happen often either. Unfortunately for the Longhorns, lightning struck twice.