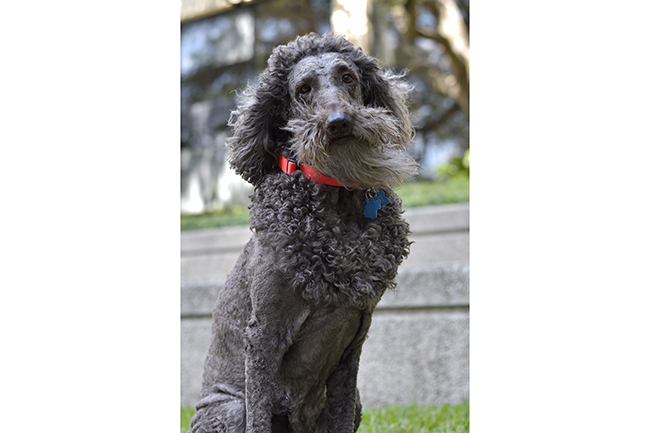 Before the AFHC Dog Beard and Moustache Competition on Saturday, Siberian Huskies and corgis wearing bandanas waited side by side in line next to the Mohawk’s stage.

Ten minutes before the contest was set to begin, a Dachsund with paralyzed hind legs scooted across the stage using only its front paws, prompting a round of applause from the audience. The competition kicked off with the “Old Timer” category, which celebrated senior dogs. One contestant carried her dog, which had bad hips, up the stage’s steps.

“Gravy was even rocking the man-bun before it was popular,” Sajak said. “He’s a trendsetter.”

Halfway through the competition, MC Paul Hendricks reminded contestants to clean up after themselves.

During the “Gnarliest Beard” category, an enormous pit bull, Kane, came down with a case of stage fright. Kane sat down at the back of the stage and refused to move until his owner put a pair of sunglasses on him.  Once the sunglasses were on, Kane trotted to the front of the stage and happily mugged for the cameras.

During the event’s closing remarks, Hendricks talked about spreading positivity through charity work.

“The news sucks right now, it’s full of war and hate,” Hendricks said. “But this is just as real. We’re having fun and we’re saving lives, one donation to the Austin Animal Center at a time.”