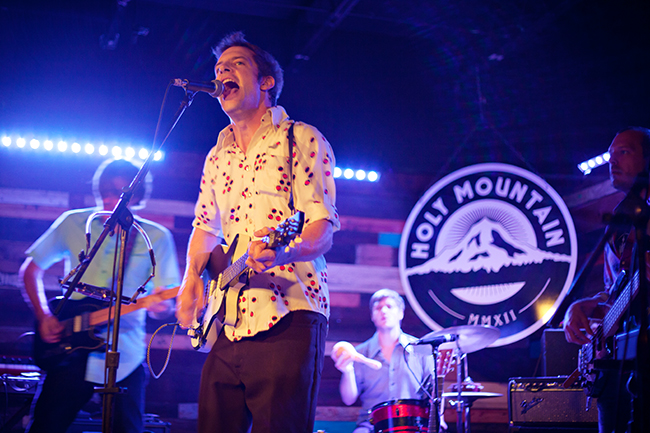 To passersby, Sunday night looked like any other at Holy Mountain as audience members wafted in and out of the bustling bar. But as staff members and patrons embraced in familiar, welcoming hugs, the venue’s imminent closing overshadowed the evening’s festivities. Although the night was a happy occasion, it was time to say goodbye.

Holy Mountain packed in a sentimental yet celebratory crowd Sunday for the last night of a three-day concert series marking the club’s final weekend before its lease expires Oct. 1. Holy Mountain is one of several Austin venues forced to close because of skyrocketing rents and short-term leases. Over the summer, these challenges also led venues such as Austin Music Hall and Red 7 to announce they’d be shutting their doors permanently.

The send-off shows included performances from Magna Carda, Eagle Claw and Mike and the Moonpies. James Taylor, Holy Mountain general manager and partner, said the lineup featured some of his favorite bands and artists who had performed at the club in the past, as well as two of his own bands — Harvest Thieves and East Cameron Folkcore.

In June, after the property’s landlord asked for more than a 40 percent increase in rent, Taylor said the club’s owners decided they had no choice but to close.

“I don’t think any of us wanted to feel dejected or like we had failed,” Taylor said. “I think we wanted to go out doing what made us want to do this, which is just putting on shows.”

After Holy Mountain opened in October 2012, the intimate, 250-person venue made a name for itself by hosting local up-and-comers and popular acts such as Ryan Bingham and Shakey Graves. Production manager Michael Anthony Gibson said part of the club’s mission was always to help cultivate new artists.

“We’re definitely in a small group [of venues] that really nurture new, local bands and give people the chance to play over and over again, hone their chops, figure out their live sound and their show,” Gibson said.

Some audience members shared memories of their favorite sets, others slow-danced in front rows, but all found ways to commemorate Holy Mountain’s legacy. Many of Sunday’s artists, such as opening act Ben Ballinger, dedicated part of their sets to thanking Taylor and other venue staffers for providing a welcoming environment over the past three years.

Courtney Goforth, a Holy Mountain regular, said the venue’s closing meant having to say farewell to a favorite neighborhood hangout. She said she’ll miss the venue’s friendly staff and the opportunity to see a combination of obscure bands and her favorite local acts.

Ashley Gregg, who was attending her second Holy Mountain show of the week, said she will miss the community that made her experiences at Holy Mountain “magical.”

“There’s nothing better than getting to see a friendly face and someone who genuinely cares about all levels of music,” Gregg said. “That’s definitely what makes Holy Mountain very special and different from a few other venues in town.”