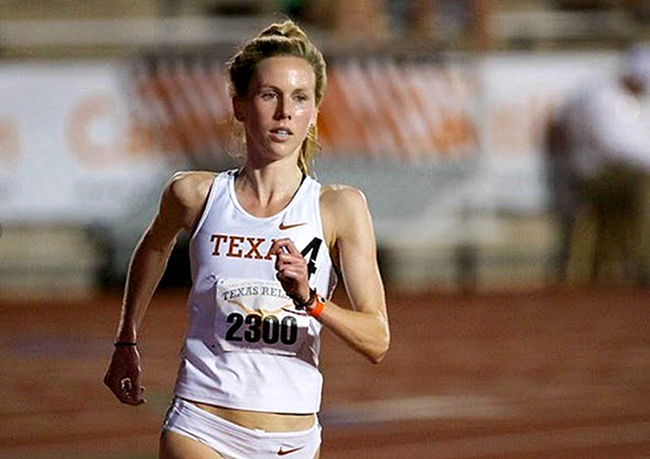 Olivia Mickle was no stranger to NCAA competition when she arrived at Texas in 2013, but being the sole graduate student on the track and field roster was a new experience entirely.

Mickle was given a unique opportunity after graduating from Brown University with a degree in chemical engineering and the school record for the 10,000m. A shin and femur injury kept her from competing in track and field during her freshman year, giving her an extra year of eligibility in the NCAA. She took a leap and came to the University of Texas, where she could run and be in the chemical engineering graduate program.

“When she was admitted to Texas for grad work, she told me ‘My life is perfect,’” Olivia’s mother, Casey Mickle, said.

After finishing her first year at Texas, Mickle saw another opportunity and, once again, she took a leap. This time she decided to put her education and scientific research on hold to pursue professional running. For Mickle, a self-proclaimed planner, it wasn’t a comfortable choice.

“Taking a turn or stepping off the conveyor belt is difficult for me,” Mickle said. “But I just knew I was going to run and figure everything else out.”

The puzzle pieces eventually connected and led her to Portland, Oregon, where she works at Nike as a footwear developer. She’s also training as a member of the Bowerman Track Club Elite Program.

She works out twice daily — once with coworkers before the workday begins and once afterward. Although she isn’t working in the field of immunology or doing cancer research like she once expected, she considers her job at Nike to be a dream.

“My running and my work are all in the same happy place,” Mickle said. “Even if it’s not an official person on the Bowerman Club Elite Group, there’s always someone to run with.”

Mickle’s parents, who were track and field athletes at the University of California-Berkeley, provide her with support.

“To run at the elite level is not easy,” Casey Mickle said. “But I also am glad that she doesn’t shy away from the challenge. She’s never been afraid to do the hard thing.”

Mickle has her sights set on the 2020 Olympics. She said most female marathoners peak in their late 20s, and the goal fits perfectly
into her timeline.

Mickle must achieve a time of 1:15:00 or faster at a certified half marathon to qualify for the Olympic marathon trials in February 2016.
Although making the trials and the Olympics are lofty goals, her family supports her dedication and drive.

“I don’t think she can fail because she has already succeeded,” Olivia’s brother, Colin Mickle, said. “She has taken risks to pursue her dream, and that is the more important victory in my eyes.”