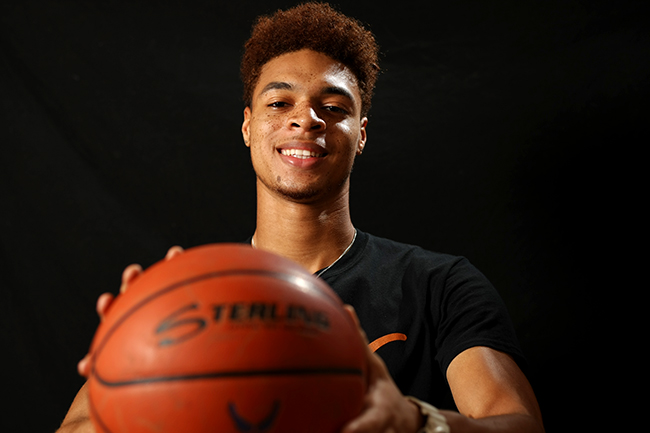 When Eddie Hall showed up to Cooley Pavilion early Tuesday morning, he expected an intense workout. He watched some film of head coach Shaka Smart’s defense — which is similar to what Hall played in high school — and was ready for a highly contested competition.

But the tryout was vastly different from what Hall expected. Only five other eligible participants showed up, and the tryout consisted of typical drills: a three-on-three weave, half-court three-on-three and full-court one-on-one.

“It was really easy,” Hall said.

Despite the ease of the tryout, Hall walked out disappointed and feeling like he didn’t play up to his capabilities.

“If I had practiced a little more and known what we were going to do going in, I might have been able to shine more,” Hall said.

Hall’s road to Texas’ walk-on tryouts has been a challenging one. In 2009, Hall’s mother died on Valentine’s Day after battling pancreatic cancer. Her death was hard on Hall and his dad, especially since doctors saw she had symptoms of the cancer following a mini-stroke but did nothing.

“Once it was too late, they were like, ‘If we had known this a week or two ago, we could’ve removed the tumor, and she would have been perfectly fine,’” Hall said.

His mother’s death also impacted Hall’s court play negatively. Hall was a standout player in eighth grade but barely made the freshman team at Foster High School in Richmond, Texas. His coaches told him they put him on the squad was because of his mother’s death.

“It just kind of sucks because I was looked at as ‘Oh, you’re not going to play that much because you’re only on the team for this reason — we’re doing you a favor,’” Hall said.

Instead of letting that keep him down, Hall transformed the experience into motivation. He worked hard through his freshman year to prove that he belonged on the team. The following year, the work paid off. Hall moved up to the varsity team by the end of his sophomore year and started for varsity by his junior year.

“He’s a naturally gifted player,” said Austin Cooper, a former teammate of Hall at Foster. “He would barely workout some times, but he would still be the strongest in the gym.”

But his challenges date back further. At age 13, Hall was diagnosed with a heart murmur. He said the murmur has never troubled him on the court, but it is a problem when it comes to physicals. Cooper said he remembers one time in middle school when Hall had to sit out multiple games because he couldn’t pass his physical. After graduation, Hall went to UT-San Antonio hoping to transfer to UT-Austin after his freshman year as a part of the CAP program. He never planned to walk on, but after playing pickup games at the gym, his friends urged him to try out.

“I didn’t want to try out, because I wanted to focus on my grades to come to UT,” Hall said.

Hall changed his mind and decided to try out but failed to fill out the necessary paperwork for San Antonio’s team. When he made the move to Austin, he decided to again pursue the goal.

“I’ve felt I’ve been good enough to play at the collegiate level,” Hall said. “I feel like I’ve never had a chance to prove myself.”

With a disappointing performance at the tryout, Hall doesn’t know whether he’ll make the team. Even if he does, it’s unlikely he’ll see court time this season. But just making the team would be enough for Hall.

“I probably would be jumping off the walls and screaming,” Hall said. “It would be a dream come true.”