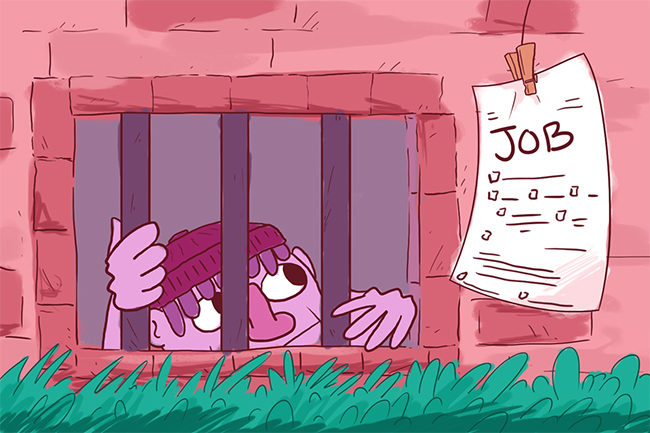 The felony “checkbox” — the box on the front of most job applications that requires ex-felons to state their criminal past — is an unfair practice that unduly harms ex-felons who are looking for legitimate futures. It keeps felons from finding jobs, which maximizes their chances of falling back into crime.

The checkbox is a common practice and generally acts as a filter for recruiters to automatically eliminate felons’ applications.

“In most cases, once they turn up a conviction, that’s the end of the road for your application,” said Jeffrey Ian Ross, a criminology professor at the University of Baltimore, in an interview with The New York Times.

Sociology professor Mark Warr teaches an upper-division criminology class that examines the U.S. criminal justice system. He was approached by a man who was released from prison and began looking for a legitimate job. The man filled out more than 200 applications — all of which possessed the checkbox — and, in an effort to be honest, checked “Yes” on the checkbox every time. He received zero responses to his applications.

When felons are continually turned down because of their past, they generally have only one direction to go — back to crime. Recidivism, or relapse into previous criminal behavior, is an immense problem in the United States. According to the National Institute of Justice, 76.6 percent of prisoners were rearrested within five years of their release. Recidivism requires meaningful job opportunities to be combated, not joblessness and professional disdain.

The checkbox is also judicially incoherent. The justice system is, in theory, supposed to hand down fair punishments for the crimes committed. The sentence given is also supposed to be the entire punishment. The checkbox, and its consequences, act as an additional unforeseen punishment beyond the sentence the felon received. Philosophy professor Paul Woodruff argues against the checkbox because it obfuscates the true severity of criminal punishment.

“If joblessness is meant to be part of the punishment, we should make that explicit,” Woodruff said.

The good news is there is a growing movement called “Ban the Box” that is working to make the felony checkbox illegal. Twelve states have banned it entirely, and many more are considering doing the same. Banning the box does not mean employers cannot administer background checks; it just removes the initial check from the application. Without this removal, felons can get interviews where they can explain their past actions on their own terms in order to show their rehabilitation.

“Ban the Box” is not a movement of hiding criminals’ pasts from employers; it is one of giving felons a chance to forge a better future in light of that past. And it’s time we give felons the second chance they deserve.

Bordelon is a philosophy sophomore from Houston.